New Cinema Experiments with Next Generation of Filmmaking

An experimental program called New Cinema premiered in New York City recently and could very well represent a new wave of theater experience at the intersection of art, cinema and interaction. Each work-in-progress within the program, “however small, seems to hint at some larger idea about how interactive software could dramatically alter — maybe even outright replace — cinematic storytelling as we currently know it,” writes The Verge.

“The future of cinema seems to be converging on something more closely resembling a video game as artists, hackers, and filmmakers process the language of film through the lens of code,” notes the article.

The works-in-progress are a result of a December hackathon organized by The Creators Project, NYC’s Eyebeam art and technology lab and Framestore, an Oscar-winning visual effects studio.

One such example comes from artist Brian Chasalow, collaborator Anton Marini and “Another Earth” director Mike Cahill. “‘In Opsis’ renders an interactive landscape from footage of a subject’s eye, captured at 3072 x 1307 resolution at around 200-300 frames per second,” explains The Verge. “The images run through software written by media artist Golan Levin, which scans for unique features in each iris (identified by tall white lines), then are brought into the Unity game engine to build a terrain map which can be navigated with mouse gestures.”

Another entry is called “Face Dance” and uses facial mapping to help execute Michael Jackson dance movies, creating an interactive music video. Another, called “We Make The Weather” (pictured below), is a sound-reactive piece where images and movement are controlled by breathing into a microphone. 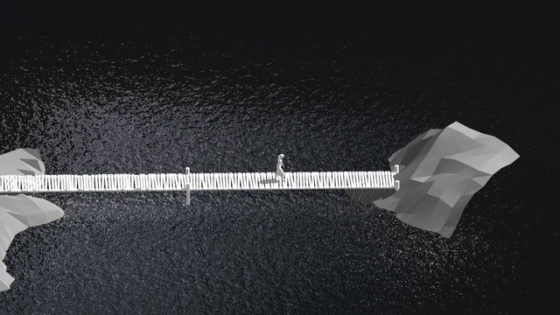 “Other projects seemed to focus on developing other cinematic techniques, tropes, and ideas — like exposition,” according to the article.

“We struggled a lot with what is a video game and what is interactive cinema,” explains Ramsey Nasser of Eyebeam. David Miller of Framestore adds: “Often in a film you’re given a montage to show you what happened and why things have happened. So we started looking at the idea of what if the viewer was in control of the backstory; what if the viewer could discover things as they went through a narrative.”

The article suggests that the collaboration between game designers and filmmakers of New Cinema could lead to an entirely new medium.