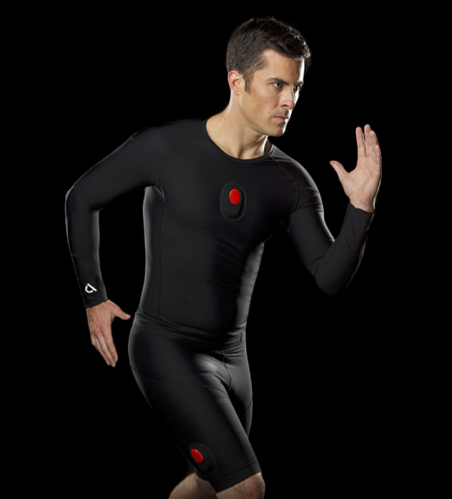 “Athos is the brainchild of Dhananja Jayalath and Christopher Wiebe, conceived when the two were students at the University of Waterloo in Canada,” reports Wired. “Like many college students, they found themselves eager to bulk up; also like many college students, neither could afford a personal trainer. As electrical engineers, the predicament posed a compelling challenge: Was it possible to replace that human touch with technology?”

The two discovered that personal trainers are effective because they have data; namely, they can tell if you are using correct form and if you are under or over exerting yourself. In order to use the same data as personal trainers, Jayalath and Wiebe turned to electromyography, or EMG — a technology that tracks muscle activity.

“Typically, EMG is used by doctors, physical therapists, and professional athletes. Jayalath and Wiebe have spent the last several years figuring out how to make the tech useful for the average person, and how to incorporate it into something they wouldn’t be mortified to wear to the gym,” explains the article.

The company plans to ship its first products sometime next summer. “Two garments — a form-fitting long-sleeve shirt and a stretchy pair of workout pants — use EMG sensors to track muscle activity on 22 muscle groups,” notes Wired. “That activity gets passed to a wearable module called the Core which crunches the data and sends it wirelessly to a smartphone app.”

Ultimately, users can see which muscle groups they are exerting and how intensely. They can also track breath and heart rate.

The sensor-laden top and bottom are available for pre-order for $99 each, with the Core priced at $199.

“We’re very self conscious about how nice the product needs to be,” Jayalath says. “It has to break away from what people think of as electronics in clothing. We don’t want it to feel like an electric blanket.”