Audio is finally getting attention as an important component of wearables. Microphone companies are integrating MEMS and sensors to create a new category of “earables.” “Fitness bands and smartwatches have dominated thus far, as a source for sensor data,” says TechKnowledge Strategies principal analyst Mike Feibus, who moderated a panel on the topic at the MEMS and Sensors conference at CES. He identified the user interface — in this case, voice — as having the effectiveness to make earables marketable and profitable.

Feigus notes that we’re seeing advancements in data sources, including stickables, implantables and injectables. But he and other panelists suggest that natural language is the most organic and powerful UI of all… and something coming down the road.

“Wearables need a voice,” said Horst Muenzel, chief executive at Akustica, a Bosch company. “Microphones are already at a reasonable stage and others are coming that are even better.” Vesper chief executive Matt Crowley notes that, “voice is a natural.”

“There’s a potential category of ‘hearables’ or smart headphones that interact with your smartphone and create an augmented reality type of experience,” he said. 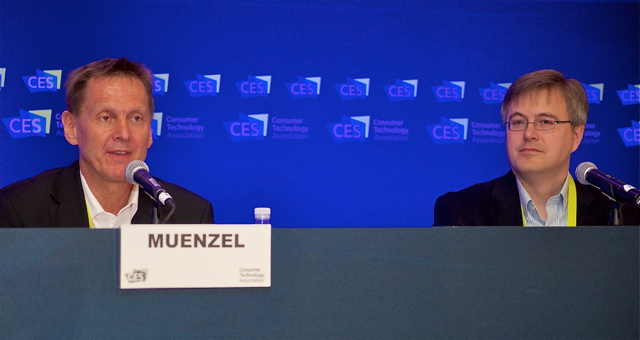 DSP Concepts chief exec Paul Beckmann (above right) notes that microphones are only part of the equation. “They’re the ears,” he said. “But the algorithms are the brains to make sense of the information. Improving algorithms is where the challenge is.”

Amazon’s new Alexa Voice Service (AVS) is a promising development, said panelists, who note that Amazon has made it easy for wearable/hardware manufacturers to add voice to any connected device with a microphone and speaker. “Alexa started slow but it’s impressing people, opening up APIs and companies are responding,” explained Feibus.

“Sometime in the future, if the voice becomes the primary way we interact with the Internet, it’s all being captured by AVS,” said Crowley. “The genius behind it is that Amazon is capturing most of the information going into the Internet.”

Voice recognition is still a challenge, says Beckmann. “You need to be a big company like Amazon, Microsoft or Apple to create a voice recognition system. Startups are where the innovation is happening.”

“We at Bosch think speech recognition will become more and more important,” said Muenzel. “For example, car entertainment systems use natural language and the customers like this and want more and more.”

Meanwhile, smart sensors that are always listening to the environment can be a powerful means of recognizing when there’s a problem. Beckmann says that this “acoustic event detection” has an enormous number of use cases. He described a wearable for a child with asthma that can record and analyze coughing to predict and prevent an asthma attack.

“People have the craziest ideas,” he said. “One non-profit wants a solar-powered chain-saw detector in the jungle canopy to detect illegal logging.”

Muenzel calls acoustic event detection “very, very important… And it will be even more important in the future because it can provide you with information about your environment.”