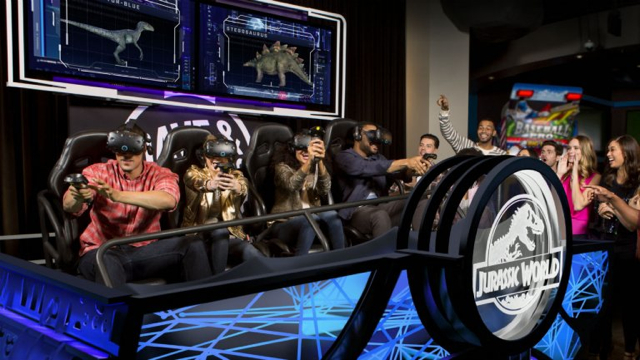 In the game, which will cost $5 per person for a five-minute experience, up to four people can play simultaneously, wearing HTC Vive headsets, on a motion platform. Those who want to play longer than five minutes can fill a “power card” with additional credits. The system will send a text message to waiting clients when their turn is up.

“We’re trying hard to make this a good experience for our guests,” said Bachus. “We don’t want them to wait for a popular attraction.”

To create this first game, VRstudios “sourced and integrated of all the key components of the attraction, including the proprietary simulator, VR hardware, motion control software, content and management platform.” The two companies have partnered to create more content for the system.

“For many, this will be their wondrous introduction to VR, and ‘Jurassic World VR Expedition’ will transport fans in a more immersive way than they could imagine,” said Universal Brand Development executive vice president Chris Heatherly. “Players will experience the dinosaurs — both the majestic and terrifying — first person.”

The Dave & Buster’s restaurants, which draw more than 45 million customers annually, “get the advantage of having VR platforms where they can swap out content over time and manage the whole operation with a customized software platform.” Visual effects artist James Lima wrote the VR app and VRC co-founders Robert Stromberg and Guy Primus executive produced it.