Julius Genachowski, a Democrat who has served as chairman of the U.S. Federal Communications Commission since 2009, announced he will resign his post in the coming weeks. His departure will open a second vacancy on the five-member agency, and he avoids leaving behind a 2-2 partisan tie, since Republican Robert McDowell also announced that he is set to resign in the coming weeks. 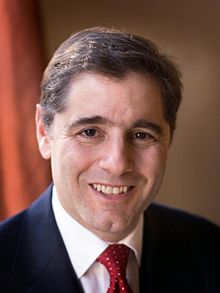 “To replace [Genachowski], President Barack Obama could elevate either of the agency’s two Democrats or name a chairman as one of two new members. Both will need Senate confirmation,” reports Bloomberg. “The changes will leave Mignon Clyburn and Jessica Rosenworcel as the FCC’s Democrats, and Ajit Pai as its sole Republican.”

“Over the past four years, we’ve focused the FCC on broadband, wired and wireless, working to drive economic growth and improve the lives of all Americans,” said Genachowski.

“Genachowski’s focus on expanding access to high-speed wireless Internet service, or mobile broadband, broke with some priorities of his predecessors,” writes Bloomberg. “His FCC levied no fines for broadcast indecency, after a flurry of penalties under Republican chairmen from 2003 to 2008, and he didn’t complete his proposed loosening of media-ownership rules.”

Innovation was the focus under Genachowski, said Obama in a statement: “Because of his leadership, we have expanded high-speed Internet access, fueled growth in the mobile sector, and continued to protect the open Internet as a platform for entrepreneurship and free speech.”

Commissioner McDowell, who has served since 2006, praised Genachowski for his service, but noted several areas in which they do not agree, most notably in regards to net neutrality.

“The FCC in 2010 approved net neutrality rules that prevented Internet service providers from blocking lawful traffic and banning discrimination against competitive services running over the ISP’s networks,” reports Ars Technica. “Wireless providers were exempt from the rules, angering many consumer advocates. McDowell, though, didn’t want neutrality rules at all, and he said that net neutrality was the biggest failure under Genachowski.”

“I just think it was needlessly disruptive and a diversion of FCC resources. But it remains to be seen what the courts think of it,” McDowell said.

McDowell also noted that the 2011 reform of the Universal Service Fund could be seen as the FCC’s greatest success under Genachowski. The reform calls for change to a fund for subsidizing rural phone companies.

“We eliminated duplicate subsidies for more than one company serving the same area,” explained McDowell. “And we introduced competitive market incentives such as reverse auctions for the awarding of some of the subsidies. And then most importantly, we repurposed it to support broadband.”

When President Obama nominates replacements, McDowell recommends he look for individuals who have “a deep and detailed understanding of the issues that the FCC will face, substantive expertise first and foremost.”

“Second, he hopes the replacements will be ‘patient’ with the fast-moving marketplace, and let it run on its own instead of imposing extensive regulations,” notes Ars Technica.