FCC Chair: “When Competition is High, Regulation Can Be Low”

The FCC’s new chairman, Tom Wheeler, spoke on Monday about usage-based pricing for Internet bandwidth, which has been strongly debated among public interest groups. Wheeler expressed his support for remaining steady with current Net neutrality rules. During a Q&A session at Ohio State University, he also suggested the marketplace should be allowed to “evolve” before coming to an ultimatum about whether providers should charge consumers based on bandwidth usage. 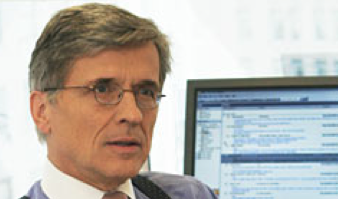 According to Variety, some public interest groups oppose this kind of pricing because it may “limit the growth of Internet video if consumers face pressure to limit their viewing of movies and TV shows.” But Internet providers insist that pricing based on usage is mainly to target “data hogs.”

“I have zero interest in imposing new regulations on a competitive market just because we can,” Wheeler said. “I have repeatedly advocated the ‘see-saw’ rule, that when competition is high, regulation can be low. The effect of the ‘see-saw’ rule gives companies control over their regulatory fates based on the degree to which they embrace competition in their markets.”

“I am a firm believer in the market,” he added. “I think we’re also going to see a two-sided market where Netflix might say, ‘Well, I’ll pay to make sure that my subscriber receives the best possible transmission of this movie.’ I think we want to let those kinds of things evolve, and we want to observe what happens from that and we want to make decisions accordingly. I go back to the fact that the marketplace is where these decisions ought to be made, and the functionality of a competitive marketplace dictates the degree of regulation.”

The Wall Street Journal adds that such support of usage-based pricing may limit carriers like AT&T and Verizon from hogging high-quality airwaves. “A key goal of our spectrum-allocation efforts is ensuring that multiple carriers have access to airwaves needed to operate their networks,” Wheeler said.

This statement, WSJ notes, “was welcomed by T-Mobile US Inc. and Sprint Corp., both of which are hoping to use the auction to beef up their networks.”