Reality Lab gave a technology demonstration of Quantum Leap, the code name for a VR recording device with 16 cameras and proprietary technology that enables it to render real-time video instantly, without post production, on a Samsung Gear VR running Oculus Connect software. Company founder Halsey Minor calls Quantum Leap, which was featured at a Digital Hollywood luncheon, capable of “the first live VR broadcast.” Minor reports that his company plans a music concert VR shoot in the next six months. 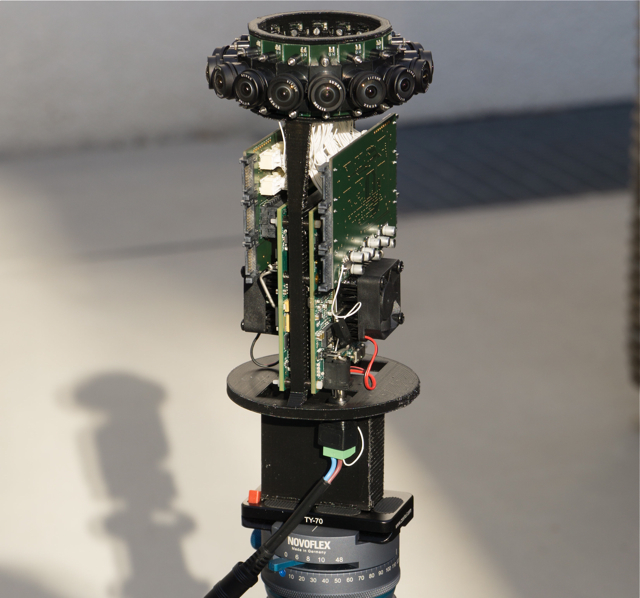 “We’re here to show it’s possible to do real-time VR and it’s any bit as good as the post processed material,” said Minor. “We are focused on music and sports and, because of rights issues, we’ll first do music. We’re already in conversation with several musicians.” The ultimate goal, he said, is to create “branded VR networks.”

“The goal is not to sell or rent the camera,” said Minor, “But to build all the pieces to capture an event.” Minor also recently launched Voxelus, a company that enables the creation of graphical worlds. Although the two companies are separate, the goal is to enable the graphical worlds created in Voxelus to “co-exist with the live video capabilities of Quantum Leap.”

Minor noted that although the VR environment may come with a default path for viewing, the user will have complete freedom to choose his or her own path, including the freedom to zoom in, a move that will use another, close-up camera. “As users pick ways to navigate, we’ll add that to our recommendations of how to view the content,” said Minor.

The experience was startling, albeit marred by pixilation, which Minor says is the result of the display’s resolution, and a 6 fps lag, due to the connection between Reality Lab hardware and the Oculus rig. Still, it was hard not to be impressed. “I can definitely see the potential,” said Zazoom Media Group executive Steve Bradbury who stopped by to test out the experience.