Intel’s customizable, 3D printable robot known as Jimmy will go on the market later this year. The singing, walking, talking, tweeting and dancing robot can be constructed by anyone with access to a 3D printer, which will assemble the basic parts. The $1,600 kit for the open source robot includes the non-printable motors, wires, battery and processor. By downloading apps, consumers can program the robot to suit their own needs and interests. 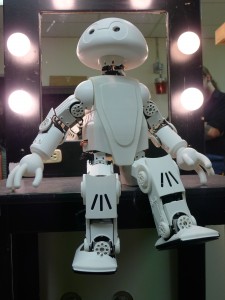 The consumer model of Jimmy runs on a low-cost computer on a chip called Intel Edison. The research version, which will cost $16,000, has a more powerful Intel Core i5 processor.

By making the robot customizable, the company is hoping that robotics can become more accessible to people without engineering degrees. “The grand vision is to lower the barrier of entry to robotics,” Brian David Johnson, Intel’s resident futurist, said.

“Intel expects that consumers will be able to build custom robots using its technology for less than $1,000 within the next five years,” Re/code reports.

Jimmy will go on the market on 21st Century Robot. The company also plans to offer an app marketplace and sell the designs and other robot kits on the site.