Cisco predicts smartphones and tablets will account for three times more data consumption than desktops by 2017. The U.S. currently consumes significantly more data than any other nation — a trend Cisco expects to continue. However, consumers in Asia are expected to collectively pass North America. Cisco also predicts the average mobile user will consume 10 hours of video, 15 hours of audio, download 15 apps and take part in five video calls per month. 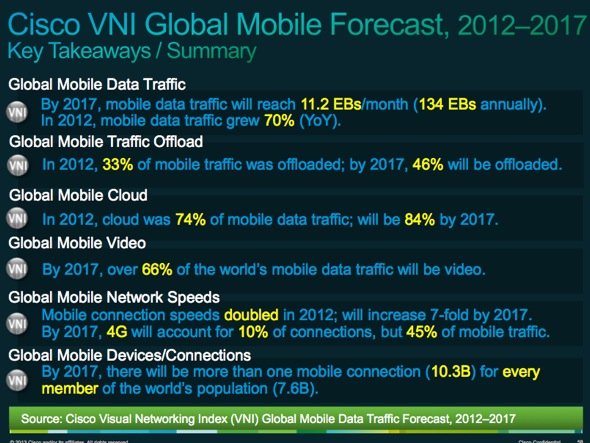 This is compared to the 2012 averages of one hour of video, two hours of audio, one downloaded app and one video call. Additionally, mobile data traffic is predicted to increase 13-fold over the next five years.

There will be more mobile devices than people by 2017, and networks will have to speed up to accommodate these numbers, says Cisco. While mobile connection speeds doubled last year, the company expects 7-fold growth by 2017.

Within five years, 4G will account for 10 percent of connections, but 45 percent of all mobile traffic.

Videos account for the largest chunk of mobile data use, which includes video chatting. Most iPhone 5 users use Wi-Fi rather than 4G for their Facetiming. 3G connections will take over as the dominant form of connection (over 2G by 2016), with 4G continuing to trail 3G.

“By 2017, there will be 1.4 mobile connections for every member of the world’s population,” suggests Cisco. In the U.S., there will be more than two mobile devices per person.

Much of the growth will involve connected devices and the emerging “Internet of Things.” Machine-to-machine mobile data traffic is expected to increase 24x in the next five years.