Chinese company EHang, known for its Ghostdrone with head-tracking VR goggles, introduced a giant quadcopter simply called “184 drone” in Las Vegas this week. The cockpit has no controls, just a seat for one passenger, a tablet stand and air conditioning. Navigation is controlled by a mobile app using Google Maps, so passengers do not require a pilot’s license, according to the company. (However, the drone will still need FAA approval in the U.S.) The drone stands about 4.9 feet, weighs 440 pounds and can transport a 260-pound load capacity for about 23 minutes.

The drone, which has a top cruising speed of 62 mph, is referred to as an Autonomous Aerial Vehicle (AAV). The simple name “184” represents: one passenger, eight propellers and four arms. 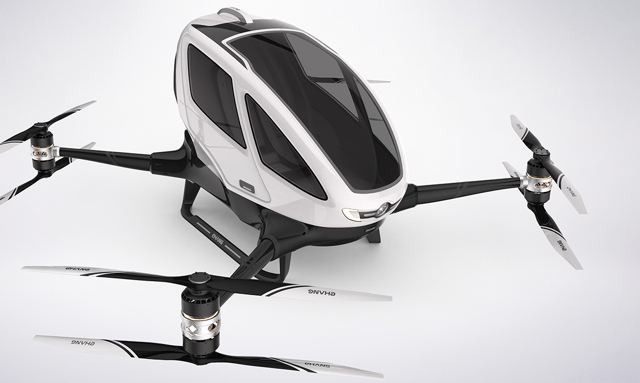 Digital Trends notes that a number of working prototypes have been developed, but production models should not be expected for at least a year or two. The company says the cost will be in the $200,000-$300,000 range.

“It’s been a lifetime goal of mine to make flight faster, easier and more convenient than ever,” said EHang CEO Hauzi Hu. “The 184 provides a viable solution to the many challenges the transportation industry faces in a safe and energy efficient way. I truly believe that EHang will make a global impact across dozens of industries beyond personal travel.”

“After we launch it at CES,” added CFO Shang Hsiao, “the goal is to do the commercialization within three to four months.”

According to Wired, “Hsiao names hospitals, coast-to-island transit, and even taxi services as potential clients. They’ll launch first in China, along with (it hopes) the U.S., New Zealand, and some other countries in Europe.”