During last week’s New York International Auto Show, visitors witnessed the promising early developments of self-driving vehicles demonstrated by a number of car companies. While a fully capable self-driving car may be years away from mainstream deployment, self-driving features that exist today impressed the crowds. Companies including Volvo, Cadillac and Audi unveiled an array of autopilot features that can control a car’s speed, brakes and steering while traveling up to 40 mph.

Tesla Motors has been focused on building a self-driving car that can race down the highway. Volvo, however, has taken a different approach with its autopilot capabilities. 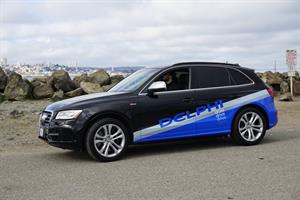 “We’re taking out the part of people’s commute that they don’t like,” said a Volvo spokesman. “Even people who normally like to drive have told us they want the autonomous part for the more boring parts of their commute. So we’re giving it to them.”

Some of Volvo’s new technology will be available this spring in its XC90 model. The tech was designed to support drivers when driving in traffic or at lower level speeds. The company’s “‘pilot assist’ system allows the sport utility vehicle to take over both the steering and throttle to follow the car in front of it at speeds up to about 35 miles per hour,” reports The New York Times.

Audi’s Q7 sport model launching next January will come equipped with self-driving capabilities at speeds up to 40 mph. In order to keep the autopilot mode running however, drivers will have be to attentive and make contact with the steering wheel every ten seconds.

“There’s not going to be some magical moment when we say, here is the autonomous car,” suggested Scott Keogh, head of Audi’s U.S. operations. “We have the technology, and we are going to keep bringing it out, step by step. You need to have customer acceptance and see what consumers are willing to pay for.”

The more sophisticated of these self-driving features, such as adaptive cruise control and lane switching capabilities, will most likely be available on luxurious models first. Eventually, much like the adoption of rearview cameras, these features will become standard and made available on lower priced vehicles.

Despite the newly unveiled features coming from the New York show, there is one car not featured at the show that has been drawing a lot of media attention. According to Wired, Delphi Automotive recently completed a test in which one of its autonomous vehicles (pictured above) completed the voyage from San Fransisco to New York, about 3,4000 miles, in nine days.

“Along the way, the vehicle encountered complex driving situations such as traffic circles, construction zones, bridges, tunnels, aggressive drivers and a variety of weather conditions,” notes the press release.

“Delphi’s automated driving vehicle is equipped with a full suite of advanced technologies and features, many of which are already on the market today including collision mitigation, integrated radar and camera systems, forward collision and lane departure warning.”