App Based on The Voice Hopes to Engage Kids with Music

StarMaker Studios, in partnership with Talpa Media Holdings, has created a new app called The Voice: On Stage. The goal is to get kids engaged with music, allowing them to use their own voices, inspired by the hit reality television show “The Voice,” according to creators Jeff Daniel and Nathan Sedlander. The app includes features that enable children to audition and compete, much like performing on the NBC show.

“Sometime after age 12 or 13, we start to become self-conscious,” says Sedlander. “People start to look at you funny if you don’t have a perfect voice. Unfortunately in our society most people stop engaging in music in a participatory way and they stop singing. They stop using the one instrument we are all born with.” 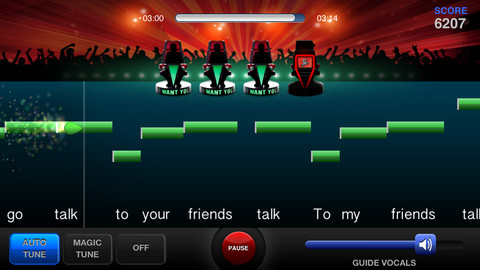 The app “scores your singing ability while offering an option to auto-tune your voice (if you try it with ear buds, you can hear your voice being manipulated in real time). However, you’re still scored on your true voice,” according to the review in The Hollywood Reporter.

“The app also allows someone to become engaged in the game much like the actual competition on NBC — if a ‘coach’ likes what they hear, the chair will turn around, mimicking the blind audition phase,” adds THR.

With sharing in the forefront, app makers took care to secure licenses for the music library. It includes such hits as Rihanna’s “We Found Love,” OneRepublic’s “Apologize” and Bruno Mars’ “Lazy Song.” Users can sing these while battling other singers, much like on the show itself.

“You can play with a friend,” Daniel says. “We’ve mapped each song out into a back-and-forth breakdown of phrases — player one sings the blue phrase while player two sings the green phrase. At the end of the recording, the results screen tells you who won the battle.”