Amazon Opens Its Mini-Mart Minus Cashiers to Seattle Public

After testing Amazon Go, the company’s mini-mart without cashiers in Seattle, the shop opened to the public on Monday. The market is in a 1,800-square foot building, with floor-to-ceiling offerings of prepared food, potato chips, drinks and other groceries. Customers gain admittance with a swipe of their Amazon Go smartphone apps, and Amazon technology keeps track of every item each customer picks up off or puts back on the shelf. The items are automatically added up in the customer’s online account.

The New York Times reports that Amazon won’t go into details about how its technology works, other than saying it’s a sophisticated blend of computer vision and machine learning. But, noted NYT, “arrays of small cameras, hundreds of them throughout the store” enable Amazon to “see and identify every item in the store, without attaching a special chip to every can of soup and bag of trail mix.” 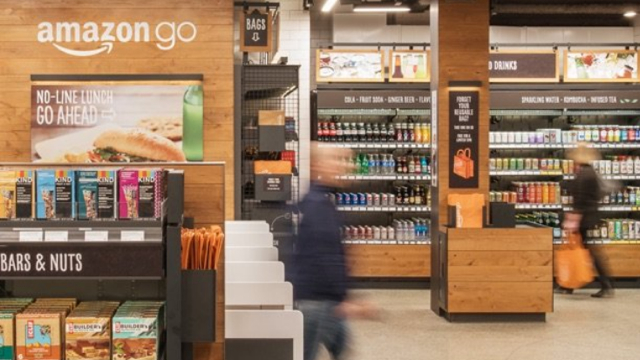 With 3.5 million cashiers in the U.S., the technology could clearly put many of them out of work. But Amazon says it “just put[s] associates on different kinds of tasks where we think it adds to the customer experience.” In addition to employees in the mini-mart to provide customer service, others are behind the scene restocking shelves. An employee in the wine/beer section of the store checks IDs.

A NYT reporter tried to trick the system by wrapping a shopping bag around “a four-pack of vanilla soda,” but found the purchase on the electronic receipt Amazon sends after the customer leaves the store. Amazon says it isn’t looking to install the technology at Whole Foods, but does not reveal future plans.

TechCrunch went shopping at Amazon Go, and also noted that “cameras track your every move,” although it deemed the system not “as complex” as expected. The “maybe hundred or so” cameras that cover every inch of the store are “ordinary RGB cameras, custom made with boards in the enclosure to do some basic grunt computer vision work, presumably things like motion detection, basic object identification, and so on.”

Amazon also uses “separate [matte black] depth-sensing cameras,” that do “the real work of quickly and accurately identifying different people in the store and objects being picked up or held.” In addition, “there are weight sensors in the shelves, and the system is aware of every item’s exact weight.” It notes that Amazon has done lots of testing with “serious crowds” and that shoplifting takes more effort than it’s worth.

The app “is self-contained,” with purchases tracked there rather than the user’s main Amazon account; Prime members don’t get discounts.