The growing 3D printing industry is leading to interesting solutions in 3D scanning, an area being explored by a group of British model train enthusiasts. “The hobbyists have established a startup called The Flexiscale Company, which launched a Kickstarter project on Monday that aims to fund the production of model kits for several old and very obscure locomotives,” writes GigaOM. 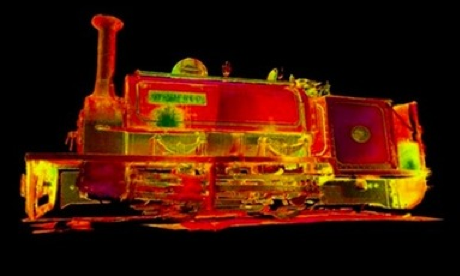 Chris Thorpe, the project lead, approached a firm called Digital Surveys last year. “He got someone from the company to come over with his equipment and laser-scan Winifred, an 1885 steam engine that had recently returned to the UK for restoration after a 40-year stint lying in storage under the Indianapolis Motor Speedway,” explains the post, which includes a video of the scan.

With that data, Thorpe was able to send it to French 3D-printing firm Sculpteo to make a 1:25-scale model of Winifred.

But Thorpe also wanted to recreate part of Winifred on a 1:1 scale. “To test whether this would work, he sent the data for the door latch to Shapeways, which returned a copy in stainless steel: effectively a spare part for a vehicle that’s more than 120 years old, complete with the patina gained by the original part over the years, with 1mm accuracy,” reports GigaOM.

This type of collaboration will become more affordable and less niche over time. While the model train example is narrowly focused, the work being done at The Flexiscale Company could open doors for those with other, broader interests, allowing for the potential of 3D scanning and printing to be realized.