Toy-making company Elemental Path unveiled the first connected smart toy to be powered by IBM’s Watson cognitive supercomputing system. A talking dinosaur is the first in the line of smart toys known as CogniToys. The dinosaur has speech recognition capabilities and it can have conversations with children, answering a wide range of their questions. Elemental Path’s Kickstarter campaign has already more than doubled its goal of raising $50,000 to start producing the smart toys.

CogniToys will be made out of a soft, texturized rubber, and a big button on the front of the toys will make the characters spring to life. Elemental Path designed the toys to be educational. The toys will be able to answer a wide variety of questions within a second or less, thanks to IBM Watson. For younger children, the toy will also be able to tell stories and jokes. 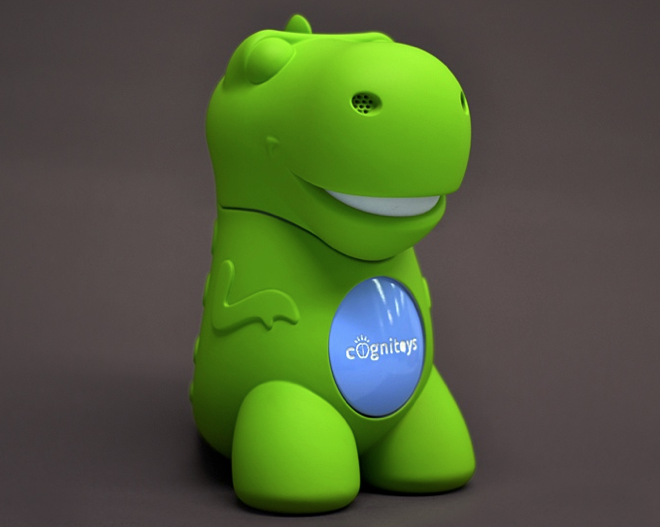 The CogniToys are considered smart toys because all of the processing happens in the cloud, not in the toy’s internal hardware. The cloud allows the toy to gain more knowledge and answer more questions as more people interact with it.

“A caching layer helps to speed up responses for questions that have already been asked before, and the toy’s content can be updated in real-time,” TechCrunch reports. Essentially, the toy will grow and evolve with the child.

The talking toys will also get to know the child better based on customization features. Parents can input the child’s name and age. They can also track their child’s learning using a cloud-based dashboard. For the questions that are better left to parents (such as “Where do babies come from?”), the toy will instruct the child to ask their parents instead.

Parents can start purchasing CogniToys as part of the Kickstarter campaign. Toys start at $99 and are expected to begin shipping in November.

In the future, Elemental Path hopes to move away from the actual toy production and focus instead on the internal software behind other smart toys. The company is already in talks with other toy companies about integrating its smart technology, which could also be used in children’s apps.