Google Makes Push for Android Smartphones in the Workplace

Since last summer, Google has been improving the technology behind Android for Work, an initiative to push the company’s mobile operating system in the workplace. Google wants to encourage employees to use their Android phones as both personal and work devices. To do so, Google built Android for Work to support personal and work profiles autonomously on a single device. The company also launched Google Play for Work, which lets companies manage their very own app stores. END_OF_DOCUMENT_TOKEN_TO_BE_REPLACED

Two Full-Sized Tablets Priced to Compete at Under $300

Apple’s iPad is now three years old. Since it hit the market in 2010, it has sold more than 120 million units and basically launched the tablet industry as a whole. But pricing remains an issue for those consumers considering making a purchase, as many name-brand tablets start as high as $499. And even lower-priced, full-sized tablets sell for between $300 and $400. However, this is about to change. END_OF_DOCUMENT_TOKEN_TO_BE_REPLACED 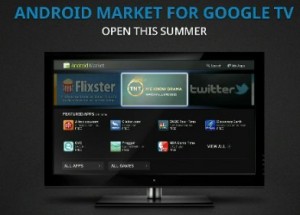 Much of the news is surrounding OS changes, the availability of cloud-based Music Beta, and a potential revitalization of Google TV.

Gizmodo reports that the Android Marketplace may have the greatest impact on Google TV when it launches later this summer: “At first, it’ll just be apps from Google-approved developers to set standards. The most awesome kind of app we’re going to see are multi-screen apps — apps specifically designed to span your Android phone/tablet to the TV. Google’s going to pushing them totally hard as a huge part of what makes Google TV special. Think things like poker games on the big screen, with individual controls on your own phone/tablet. And other crazy ways to control Google TV from your phone from app developers.”

Some of the recent Google announcements include:

Check out the posts below for more details…

Related ZDNet post: “Google TV getting update to Android 3.1, access to Android Market this summer. Will it be enough?” (5/11/11)

Related Gizmodo post and video: “Google Music: Upload and Stream All Your Tunes From the Cloud” (5/10/11)