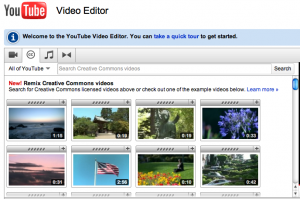 Google-owned YouTube announced last week that its YouTube Video Editor now features access to more than 10,000 Creative Commons-licensed videos, including clips from partners such as C-SPAN, Voice of America, Public.Resource.org and Al-Jazeera. “It’s as if all the Creative Commons videos were part of your personal library,” explained product manager Jason Toff.

According to the YouTube Blog announcement: “As part of the launch of Creative Commons licensing on YouTube, you’ll also be able to mark any or all of your videos with the Creative Commons CC-BY 3.0 license that lets others share and remix your work, so long as they give you credit.”

Creative Commons is “a nonprofit organization that develops, supports, and stewards legal and technical infrastructure that maximizes digital creativity, sharing and innovation.” It was co-founded by Harvard professor and political activist Lawrence Lessig. The Creative Commons licensing process will provide YouTube users with a simple mechanism for legally integrating existing video content into remixes, mashups, music videos and more. TIME reports that the CC-BY 3.0 license “allows for sharing, remixing/adapting and commercial use of the original, as long as the original author is credited.”

CC-BY also allows for commercial reuse, which will not only benefit YouTube and its producers, but in the long run should have an impact on Creative Commons as well. GigaOM reports: “The organization has gotten a lot of traction amongst photographers ever since Flickr added a Creative Commons licensing options as part of its uploading process. Recent Flickr data reveals the site is now hosting close to 190 million Creative Commons-licensed photos. Its licenses haven’t been nearly as popular in the video space, where it has only been adopted by smaller hosting sites and select individual publishers. YouTube’s sheer magnitude could help to make Creative Commons mainstream for video as well.” 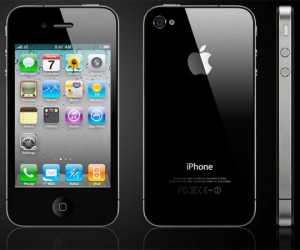 iPhone Poised to Become the Most Popular Camera on Flickr

According to Flickr’s “camera finder” feature, the iPhone 4 is heading towards becoming the most popular “camera” used to submit images to the photo-sharing site. Is the iPhone (and other smartphones with improved camera features) disrupting the point-and-shoot market?

Flickr’s camera finder provides a graph detailing the most popular cameras in the Flickr community, with the Nikon D90 currently at the top. However, the iPhone 4 is on the rise, while traditional point-and-shoot cameras are steadily declining. If the trend continues, the iPhone is poised to take the lead in the near future.

This isn’t the first time a phone may prove more popular than a traditional camera on Flickr. PC World reports that in August 2009, the iPhone edged by the Canon Digital Rebel XTi as the most popular (back when the best iPhone camera only featured 3.2-megapixel resolution).

We recently reported that Cisco had shut down production on the popular Flip camera line, possibly in response to smartphones’ ability to shoot HD video. Is the iPhone still proving disruptive, four years after its initial release? According to GigaOM: “The takeaway is that smartphones are nearing the tipping point in terms of camera quality when it comes to the needs of most average users (professional and prosumer DSLRs continue to do well), and the iPhone 4 is leading that charge. Phones provide a much more convenient on-hand camera experience than do dedicated devices, and the trade-offs in terms of quality and feature are becoming less significant all the time.”