Samsung created the Dynamic Vision Sensor, a digital eye based on the IBM TrueNorth chip, which relies on neuromorphic computing optimized for low-power processing of large amounts of data. The chip is composed of 4,096 tiny computing cores — which create a million digital brain cells and 256 million connections — sending short messages to one another. The result is a chip that acts similarly to the brain’s neurons. The Dynamic Vision Sensor processes video imagery in which each pixel operates independently.

CNET quotes Samsung Advanced Institute of Technology vice president of research Eric Ryu as reporting that the resulting camera, which consumes only 300 milliwatts of power, can operate at 2,000 frames per second, a capability “useful for creating 3D maps, safety features on self-driving cars and new forms of remote controls that recognize gestures.” 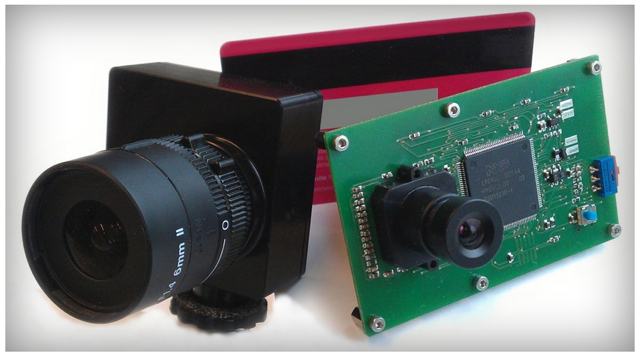 In a demonstration, the chip was able to recognize hand gestures, hand waves, finger waves, closed fists and finger pinches “from about 10 feet away.” Ryu notes that, “the human brain can handle some tasks with 100 million times less power than a computer.”

“There is a huge gap between biology and modern silicon technology,” he added.

IBM already stacks the cool-running chips into 16-chip packages “that come closer to matching the scale of the roughly 86 billion neurons in a brain.” Samsung plans similarly to gang-up chips.

At an IBM event, other researchers talking about the potential of TrueNorth included the Air Force Research Laboratory, which is looking into its use “in identifying unusual events in video, detecting computer attacks, turning printed text or audio into searchable data and summarizing it, and giving drones autonomy when in flight but not connected to a human controller at a distant military base.”

Air Force lab principal electronics engineer Qing Wu notes that a drone “has to able to know where it is, what to do next, where to fly next.” “We need very power-efficient processing on board,” said Wu. “That’s where we believe IBM’s TrueNorth chip can help dramatically.”

The Lawrence Livermore National Laboratory in Livermore, California has also successfully tested TrueNorth “to detect cars in cluttered situations in video that is shot from above, sort of like video from a satellite or surveillance aircraft” and is trying to integrate it with supercomputers.