SoftBank has plans to release a line of consumer robots in Tokyo this summer. The humanoid robot, known as Pepper, stands four feet tall, rolls around on wheels and effectively engages in simple conversations with people. The company predicts that robots will one day emerge as the next mass-market technology assisting people in a wide variety of applications. Pepper, developed by French subsidiary Aldebaran Robotics, will be connected to SoftBank’s mobile network in Japan that currently has about 37 million subscribers.

According to The Wall Street Journal, “[most] of the robots launched for consumers so far have been vacuum cleaners or toys that failed to catch on beyond a niche market of enthusiasts.” SoftBank’s development of Pepper represents a different approach to consumer robots. While Pepper may not vacuum and wash dishes, it communicates with people effectively. 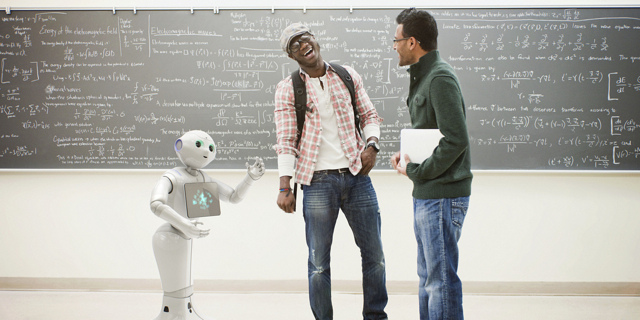 SoftBank recently partnered with IBM to collaborate on the development of an artificial intelligence technology for the Japanese market.

Because robots are so popular in Japan, it could mean that consumer robots will be well received there. Prime Minister Shinzo Abe has set a goal of “doubling the presence of robots in industry and increasing twentyfold their use in service industries, by 2020,” WSJ explains.

Researcher Freedonia Group forecasts a $22.7 billion robotics market by 2019. And while industrial robots are anticipated to represent about two-thirds of those sales, the growth of consumer robots is predicted to take off quickly.

Toshiba and startup Robo Garage are among others also developing robots. Pepper will retail for 198,000 yen, which is the equivalent of $1,665 U.S.