Oculus Story Studio premiered “Henry,” its second virtual reality movie, at an event in Beverly Hills yesterday. The San Francisco-based company is attempting to define the parameters of VR content by making short movies. The studio’s first movie, “Lost,” which was shown at the Sundance Film Festival, focused on immersing the viewer in an environment. “Henry,” however, focuses on creating a character — a hedgehog with a problem — and figuring out how to use that character’s presence in virtual reality.

“Most of what we’ve seen in virtual reality is marketing,” explained Oculus founder Palmer Luckey. “You haven’t seen it used to tell an entirely new story made explicitly for virtual reality. The only way you can make great VR is from the ground up with its strengths and weaknesses.”

In “Henry,” the eponymous hedgehog wants friends, but his prickly exterior injures anyone he hugs, and potential friends flee from him in fear. That’s until some balloon animals that have likewise fled his embrace return with the perfect friend for a prickly character. 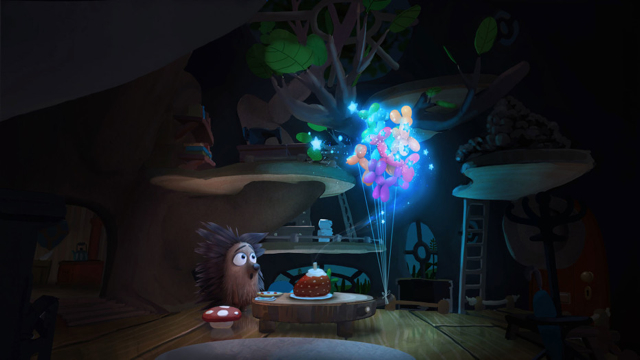 Directed by Ramiro Lopez Dau and produced by Edward Saatchi with production design by Kendal Cronkhite, “Henry” was inspired by Story Studio creative director Saschka Unseld, who directed and wrote the short “The Blue Umbrella” while he worked at Pixar. What made him fall in love with movies when he was a child, he realized, were the “wonderful, magical characters.”

“That was the idea with ‘Henry’… to believe you are right there with the characters,” he said, noting that, from time to time, Henry looks directly at the viewer. “There is no fourth wall. It’s you, the character and the story and nothing in between.”

Well, not exactly. I saw “Henry” and found it charming, but clearly still an experiment. The hedgehog was nicely designed and animated, as were the balloon characters and Henry’s new friend. The story made great use of the environment and sound cues to guide the ever-inquisitive viewer to stay focused on the story.

But there are still glitches that, for me at least, broke my suspension of disbelief. I was encouraged to sit down if I felt like it, but I remained standing which is why, explains Oculus, the balloon animals flew through me rather than over my head. And when Henry’s birthday cake — a succulent strawberry with cream on top — splatters so spectacularly, I had to check it out, including the detritus at my feet. Oh wait, I’m staring at exactly where my feet should be and, nope, no feet.

Virtual reality storytelling has a long way to go and nobody knows that more than the Story Studio creatives. “It’s a completely new medium and it’s barely reached the level we need to tell these stories and create these characters,” Unseld noted. “We’ve barely explored it.”

Talking with Lopez Dau, Cronkhite and Saatchi revealed insights into what they learned in the process of making “Henry.” “We approached it like a traditional animated movie, with 2D storyboards but when we tried to make it into VR, that changed it all,” said Lopez Dau. “We learned we had to jump into VR as soon as possible.”

That meant that throughout the entire production process, the creatives regularly wore their headsets to see what their work looked like in the world of VR. “We had to prototype every set-up along the way in VR to find out if it still worked,” according to Cronkhite. “On a 2D screen, you don’t get the sense of scale, and scale is very important in VR.” 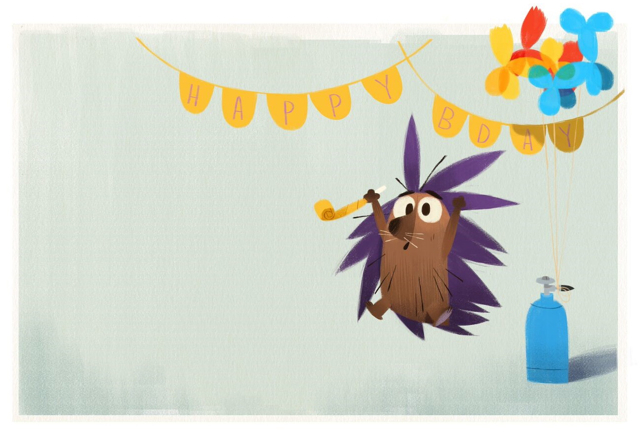 The creative team also learned that the story has to be told more slowly in VR. “We had a two-minute animatic at some point but we started playing with it in VR and we realized we needed more time,” said Lopez Dau. “It’s a big struggle to tell the story, to slow it down so that people can explore where they are.”

Saatchi agrees. “With ‘Lost,’ our first VR project, the goal was to establish if you can tell a story of any kind,” he said. “With ‘Henry,’ we wanted to explore creating a character you can connect with. But in both cases it’s the ‘presence’ that’s the Holy Grail concept: tricking the body and brain to be somewhere they aren’t.”

The challenge, he notes is that “presence clashes with storytelling.” “It takes a lot of mental bandwidth to just be in the location,” he said. “In ‘Lost,’ the environment was overwhelming and adding story was too much.”

Sitting in a theater and watching a character on the screen is, he adds, “very different than if you’re standing next to them.” “Exploring that feeling is what we’re doing and there are ways it is not suited to storytelling.”

That’s why Story Studio’s third project — although it has not yet been announced — will be less about story and more a focus on presence, as a way of continuing to explore VR’s two important and contradictory factors. “The objective is to take off your headset and say, ‘Oh my god, I was there,’” Saatchi said. “Right now, the story, to some point, gets in the way of that. There’s no killer app now. The point is to explore.”