The FLYBi automates many of the operational tasks that often frustrate drone users. In addition to standard features (remote control, companion app, 12MP camera, 1080p video, on-board Wi-Fi), the FLYBi has the ability to take off, hover, land — even return and change batteries — with little or no interaction by the pilot. VR goggles aid in operation, thanks to a camera unit installed on a gimbal and connected to the head-tracking unit. The FLYBi also features a 1.8-inch display with anti-glare glass and a wrist-worn remote, one of the first wearable drone controllers.

“Users control the FLYBi using a waterproof, wearable controller containing a small joystick and a set of dedicated buttons,” reports Digital Trends. “These buttons initiate take off, control hovering, take photos, and even return the drone back to its base.” 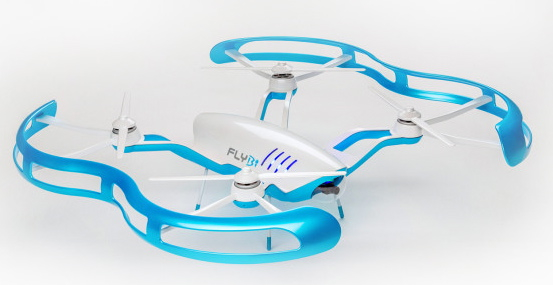 The goggles provide a unique perspective of the drone in flight through a video feed connected to two internal HD LCDs in the glasses. The FLYBi only offers 55-degree rotation (unlike the 360-degrees of some other gimbals) in order to prevent disorientation while using the head-tracking feature.

With the system’s companion app, users can program a flight path for autonomous operation (the FLYBi will reportedly adjust course slightly if faced with obstacles). Upon return, the drone is housed in its Helideck base where it can swap out batteries if necessary.

“The full package, which includes the FLYBi drone, the wrist control, the head-tracker goggles and two extra batteries, costs just $1,495 for the first 20 people to back the project,” notes DT. “Other packages include the drone, wrist RC, and goggles set for $1,195, as well as a standalone drone for as low as a mere $595.”

For more information, check out the FLYBi’s Indiegogo page (the project surpassed its $35,000 project goal in less than two weeks).