A Cupertino-based startup may have finally developed a universal remote that can help manage the growing array of smart home devices. Last month we reported on NEEO and the launch of its Kickstarter campaign, which has since generated more than $1.2 million in pledges. NEEO is an automation system designed to control all the devices in your home. It also features palm recognition technology, which identifies when a specific person is holding the remote to bring up their personalized profile.

NEEO has a slick aluminum design that features a touchscreen display at the top and a simple arrangement of buttons at the bottom to change channels, adjust volume and navigate different menus. The touchscreen display is said to have an impressive 291 pixels per inch. 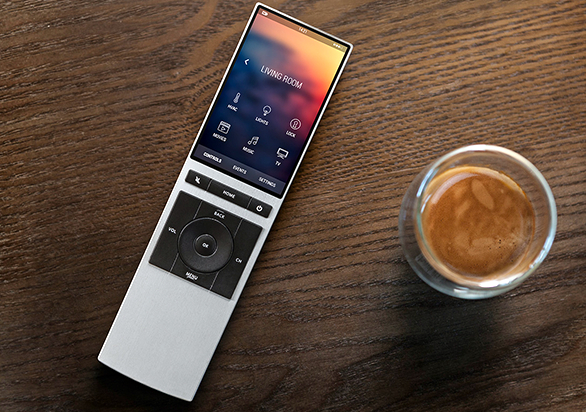 “The remote’s makers claim it can control 30,000 products out of the box,” reports Wired. “That covers all major AV gear made in the last decade, including TVs and sound systems, cable boxes from the likes of Comcast and Time Warner, set top boxes like Apple TV and Roku, and other popular products like Sonos speakers and Philips Hue light bulbs.”

The device can communicate via Bluetooth, Wi-Fi, 6LowPAN, ZigBee, Thread and Z-Wave as it comes enabled with four antennas.

Rafael Oberholz, CEO and co-founder of NEEO, says the device is unlike traditional remote controls because of its “vast database of undocumented codes that give it more specific control over your devices,” Wired reports.

Oberholz started NEEO following a background as an electrical engineer at Bang & Olufsen and as a part of management for a leading smart-home installation company in Europe. After several years working with owners of smart devices, Oberholz arrived at the simple conclusion that smart phones do not make for the best universal remotes. The experience of using apps to control lights or volume was not as seamless as it could have been.

NEEO currently has a Kickstarter campaign that runs until the 12th of February.