Joichi “Joi” Ito, director of the MIT Media Lab, explored how radical new approaches to science and technology can transform society in his SIGGRAPH 2015 keynote presentation. Ito’s remarks addressed what he and his colleagues at the Media Lab view as a fundamental shift in the way we need to work, collaborate, think, imagine and create. He calls it the “Creativity Compass” and unites science, art, design and engineering. Several of the Media Lab’s futuristic projects were also featured.

“The tyranny of traditional disciplines and functionally segregated organizations fail to produce the type of people who can work with this creativity compass, but I believe that in a world where the rate of change increases exponentially, where disruption has become a norm instead of an anomaly, the challenge will be to think this way if we want to effectively solve the problems we face today, much less tomorrow,” said Ito in a more detailed explanation on his blog.

The Media Lab is a pure research institution within MIT, meaning that there are no classes. It is guided by a set of principles that promote resilience over strength, pull versus push, risk over safety, systems over objects, compasses over maps, practice over theory, disobedience over compliance, emergence over authority, and learning over education.

Learning is all about doing and experimenting.  Projects underway reflect an extensive and expanding media universe. The principles and some of the projects (text quoted from Media Lab website) of particular interest to media and entertainment follow. 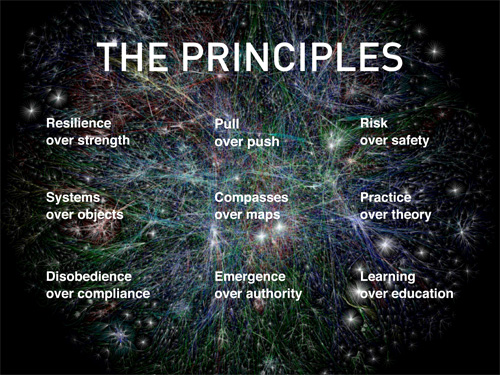 Trying to take pictures in the dark or through a window is difficult for professional photographers and everyday people alike. A group of researchers at MIT have proposed a camera that can take a perfect picture, no matter what the lighting contrast is. Called a “Modulo Camera,” this camera is designed to never overexpose an image, enabling high dynamic range photography. This achievement was awarded the best paper runner-up at the 2015 International Conference on Computational Photography.

The Future Storytelling working group at the Media Lab is rethinking storytelling for the 21st century. The group takes a new and dynamic approach to how we tell our stories, creating new methods, technologies, and learning programs that recognize and respond to the changing communications landscape.

The group builds on the Media Lab’s more than 25 years of experience in developing society-changing technologies for human expression and interactivity. By applying leading-edge technologies to make stories more interactive, improvisational, and social, researchers are working to transform audiences into active participants in the storytelling process, bridging the real and virtual worlds, and allowing everyone to make and share their own unique stories.

Visual media has irretrievably lost its lock on the audience but has gained unprecedented opportunity to evolve the platform by which it is communicated and to become integrated with the social and data worlds in which we live. Ultimate Media is creating a platform for the invention, creation, and realization of new ways to explore and participate in the media universe. We apply extremes of access, processing, and interaction to build new media experiences and explorations that permit instant video blogging, exploration of the universe of news and narrative entertainment, and physical interfaces that allow people to collaborate around media.

The Future of News is designing, testing, and making creative tools that help newsrooms adapt in a time of rapid change. As traditional news models erode, we need new models and techniques to reach a world hungry for news, but whose reading and viewing habits are increasingly splintered. Newsrooms need to create new storytelling techniques, recognizing that the way users consume news continues to change. Readers and viewers expect personalized content, deeper context, and information that enables them to influence and change their world. At the same time, newsrooms are seeking new ways to extend their influence, to amplify their message by navigating new paths for readers and viewers, and to find new methods of delivery. To tackle these problems, we will work with Media Lab students and the broader MIT community to identify promising projects and find newsrooms across the country interested in beta-testing those projects.

Half of the world’s population currently suffers from some form of physical or neurological disability. At some point in our lives, it is all too likely that a family member or friend will be struck by a limiting or incapacitating condition, from dementia, to the loss of a limb, to a debilitating disease such as Parkinson’s. Today we acknowledge and even “accept”serious physical and mental impairments as inherent to the human condition.

But must these conditions be accepted as “normal?” What if, instead, through the invention and deployment of novel technologies, we could control biological processes within the body in order to repair or even eradicate them? What if there were no such thing as human disability?

These questions drive the work of Media Lab faculty members Hugh Herr and Ed Boyden, and MIT Institute Professor Robert Langer, and what has led them and the MIT Media Lab to propose the establishment of a new Center for Extreme Bionics. This dynamic new interdisciplinary organization will draw on the existing strengths of research in synthetic neurobiology, biomechatronics, and biomaterials, combined with enhanced capabilities for design development and prototyping.