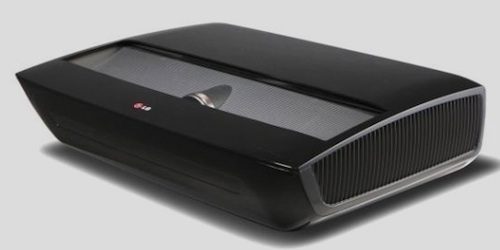 “LG’s Laser TV has a digital tuner and two 10W built-in speakers embedded in the projection unit to support virtual surround sound for a more authentic cinema experience at home,” according to the press release.

“A complete complement of inputs, including 3 HDMIs, allow for connection of other source devices. An optical audio output, as well as RS-232 interface, will allow for integration into virtually any home theater environment.”

The Hecto system utilizes a laser-based illumination system, using specialized lamps embedded into the projector that can last up to 25,000 hours without replacement, five times the average lifespan of a mercury-based lamp system.

The system supports LG’s Smart TV platform, which includes features like built-in Wi-Fi, Netflix, YouTube, an app store and the Magic Remote. It was also built to allow consumers to manage personal content like pictures, home videos and music libraries via USB or the LG Cloud.

During its press conference today, LG (Central Hall, #8204) indicated the Hecto Laser TV will launch in Korea later this month, with plans for a March release in the U.S. However, pricing has yet to be announced.