The Netherlands-based Kremer Collection is home to a collection of 17th Century Dutch and Flemish art, including Rembrandts. After two decades of loaning out its collection to galleries around the world, the Collection just opened a virtual museum. Using photogrammetry, more than 70 paintings were recreated as immersive VR images. The museum visitor, wearing an HTC Vive VR headset, enters a virtual gallery with a blue sky (common in Old Dutch paintings) and walkways that “float” in space.

Bloomberg reports that architect Johan van Lierop designed the Kremer Collection’s VR space, “trying to capture the scientific and artistic vigor of the Golden Age” for what ends up feeling “exclusive, like a private tour.” 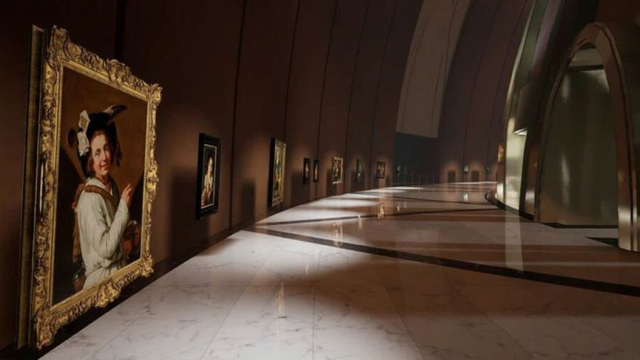 The visitor uses a handheld wand to point and click “across the walkways to galleries housing different masterpieces.” Because photogrammetry has captured all the paintings’ details, the visitor can see “the layers of paint and the cracked canvas surface.”

The visitor also sees a hologram of the Collection founder George Kremer, who narrates the audio track, and his wife Ilone, standing beside the paintings. The visitor can “go behind the painting and observe writing, notes and other historical artifacts normally hidden from view.”

Kremer and his son Joel, who previously worked at Google, hatched the idea for the virtual museum during conversations. The father, who began assembling the collection in 1994, wanted a permanent space for the collection but a brick-and-mortar museum would take time and money to build and “would ultimately be limited mostly to people visiting the Netherlands.”

The VR collection is slated to travel to pop-up events around the world, and “by early next year, there will be a mobile application on Google Play for Daydream.” The mobile app will be priced based on the number of visits. George Kremer also created the TKC Mighty Masters program to provide VR headsets to a handful of schools around the world, and Joel Kremer adds that, “as the technology improves, the museum experience will too.”