In just over one week, the Kickstarter campaign for the “Exploding Kittens” card game attracted more than 119,000 backers, breaking the crowdfunding site’s record for the most backers. The campaign, which continues for another two weeks, has raised more than $5.3 million as of press time today. The card sets for the Russian roulette-inspired game will start shipping this summer. The meteoric success of “Exploding Kittens” is unusual because Kickstarter is mainly known for funding tech projects and video games.

Video game makers Elan Lee and Shane Small are the creators of the “Exploding Kittens” game. Matthew Inman of “The Oatmeal” cartoons did the comedic drawings for the card set, which features thousand-year-old back hair, portable cheetah butts, and unicorn enchiladas, in addition to the game’s namesake. Backers who donate $20 or more will get the unique game shipped to them. 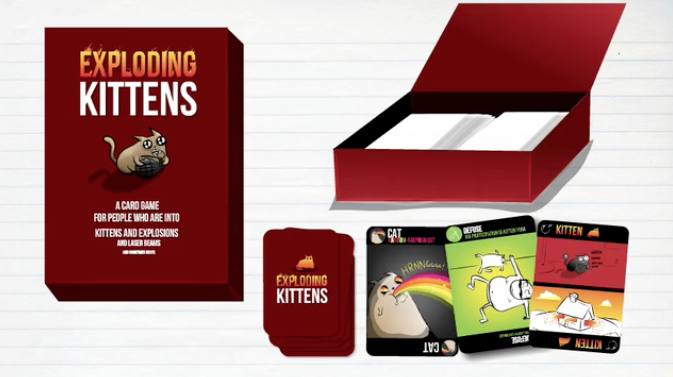 The creators of the game never expected this type of success. They didn’t expect to sell more than 1,000 sets and their Kickstarter goal was $10,000. Elaborate decks of the game priced at $100 and $500 have already sold out. Lee and Small are now working with their printer to meet the high demand for their simplest deck.

The community of backers are also shaping the game by giving their own feedback. Some players commented on the Kickstarter page about how the card’s layout made them difficult to fan out for left-handed players. Lee told CNN that they are working on improving the game to solve that problem.

In addition to the community, another benefit of the Kickstarter campaign is that the creators can start reaping the benefits of virality right away. The Wall Street Journal reports, “People who fund projects understand that entrepreneurs might raise more money than they need to bring their ideas to market, thus yielding immediate profits for the creators.”

Despite the record number of backers, “Exploding Kittens” is only seventh in the standings for the most money raised via Kickstarter.