Amazon Makes its First Commercial Drone Delivery in the UK

Amazon chief executive Jeff Bezos reports that, on Dec. 7, the company made its first commercial drone delivery — of an Amazon Fire streaming device and popcorn — to an Amazon shopper in Cambridgeshire, England. The drone took off from a nearby Amazon warehouse and flew two miles in approximately 13 minutes. Amazon will now test drone deliveries in that country with two more customers near Cambridge, where it has a drone testing facility. The company hopes to expand the trial to up to dozens of people in the next months.

The New York Times notes the drone delivery service, dubbed Prime Air, “is a milestone for a technology that could eventually automate an important part of Amazon’s business,” but also points out that, “there are reasons to be skeptical about how broadly drones can be used … because of aviation rules, weather restrictions and weight limitations on cargo.” 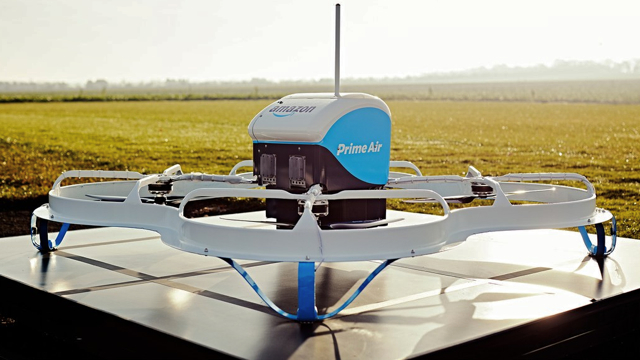 However, even if drone deliveries account for “a small portion of Amazon’s overall deliveries,” the service could save money and reduce pollution, with fewer truck drivers, and benefit customers, “who could be able to receive their orders more quickly, depending where they live.”

Amazon’s drone tests have taken place in the U.K. because regulators have been “more cooperative,” inking an agreement to “allow the testing of drones in rural and suburban areas” including navigating with GPS alone and no human pilot at the controls. In contrast, the U.S. Federal Aviation Administration this year issued rules that allow for limited commercial use of drones, but “devices must be operated remotely by a human pilot.”

Amazon says it has “sense-and-avoid” technology to maneuver around towers, birds and “other obstructions,” but some Cambridgeshire residents are up in arms, saying the drones threaten wildlife.

“They are testing those drones here because they can’t do it in America,” said Julia Napier, who helped found a local association that maintains footpaths around one of Amazon’s test sites. “Whatever the Americans don’t want, I don’t want it, either.”

The drone that Amazon is using in its delivery experiments, says NYT, “appears to be a quadcopter — a helicopter with four rotors — that can take off and land vertically,” and uses cameras to “identify landing marker pads that customers place in their backyards.” Devices are limited to cargo under five pounds.