Israeli Startup StoreDot Can Charge Your Phone in 30 Seconds

Tel Aviv-based startup StoreDot has unveiled a prototype of a mobile phone charger that can reportedly charge a dead phone’s battery to 100 percent in a mere 30 seconds. StoreDot was created by members of the nanotechnology department at Tel Aviv University. The current prototype, about the size of a laptop charger, is compatible with the Samsung Galaxy 4. The company has plans to reduce the device’s size and expand to other smartphones when the $30 charger becomes available in late 2016. 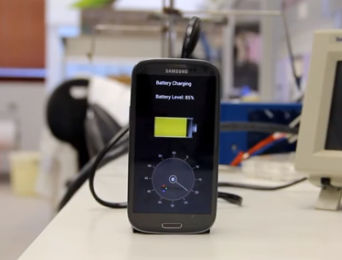 According to The Wall Street Journal, “StoreDot has been developing biological semiconductors, made from naturally occurring compounds called peptides, or short chains of amino acids, the building blocks of proteins. The technology can be used, among other things, to speed charging times, the company says.”

“Right now we show a battery that extends beyond the form factor of the smartphone,” said StoreDot’s CEO and founder Dr. Doron Myersdorf. “So in one year we’ll have reached the size and in two years we’ll reach the required energy density for the entire day.”

The technology is based on Alzheimer’s research by members of the nanotechnology department at Tel Aviv University. The work identified peptides that will be used in the bio-organic batteries.

StoreDot has high hopes for creating other developments in energy storage, and is hoping to raise around $20 million to continue its research and production.