YouTube has unveiled the “YouTube WatchMe for Android” project, which provides app developers with the ability to integrate live streaming into their Android apps. The open source project is available on GitHub, but so far, the project only offers a reference app where a user simply presses a button in the app to start and stop broadcasting. Eventually, YouTube plans to develop a toolkit that will help developers include a broadcasting capability for their own apps.

The app on GitHub is still in an experimental phase, but YouTube says the technology is similar to pre-existing apps like Xperia’s “Live on YouTube” and HTC’s “Re.” 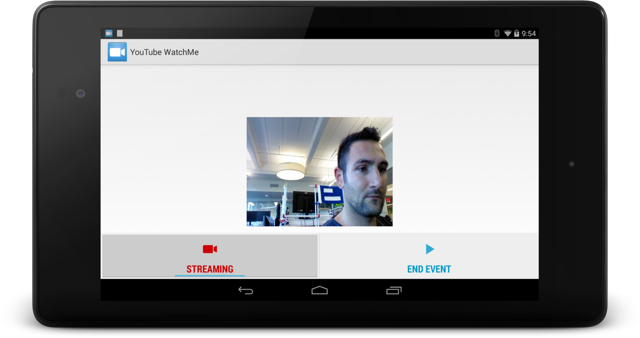 The app is aimed at developers who have already created apps that share video. Perhaps, an event-specific app, like an app for a festival, could also use the broadcasting technology. Also, the upcoming toolkit could help companies build a broadcasting mobile app to accompany hardware like a video camera.

According to YouTube’s blog, developers can customize it for their own apps and contribute by “filing merge requests for new features or submitting bug reports.”

YouTube already has a live streaming functionality designed for the desktop. Event creators can capture video with their webcams or other cameras and use custom encoders and controls for live streaming. The YouTube WatchMe Project is designed to bring these same capabilities to mobile.