Wi-Fi Alternative Could Help Build The Internet of Things

Taylor Alexander, a robotics engineer, has developed a work-in-progress project called Flutter as a Wi-Fi alternative. This “second network” can cover 100 times as great an area, with a range of 3,200 feet, with little power used. The project came about after Alexander attempted to connect sensors to one another during an app redesign on a project and found that Flutter could expand the potential of the Internet of Things, where all devices despite their size are connected to the Internet.

“We have Wi-Fi in our homes, but it’s not a good network for our things,” says Alexander.

“Wi-Fi was designed for applications that require fast connections, like streaming video,” notes Quartz, “but it’s vulnerable to interference and has a limited range — often, not enough even to cover an entire house.” 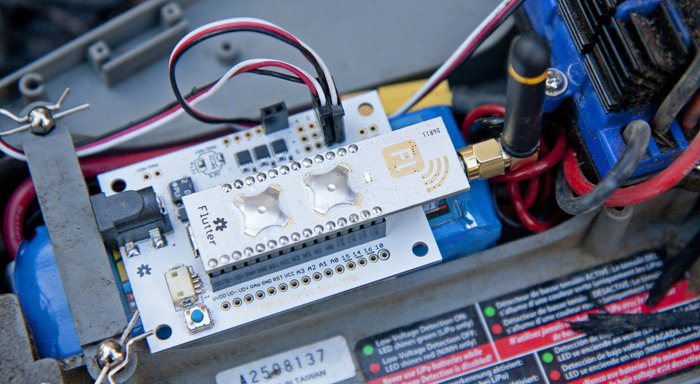 For short distances, wireless connections using Bluetooth are sufficient. For industrial use, Zigbee has been the standard for ten years.

Alexander discovered two major problems with Zigbee: It is too difficult to use, such as the problems he encountered in attempting to connect sensors over long distances. Also Zigbee is not open source, making it difficult to integrate with projects that hardware startups may want to create.

Spark Core and Electric Imp are Flutter’s closest competitors, but both use Wi-Fi, which limits their usability in home-based projects. Another difference is cost, in that a Flutter radio costs merely $20.

“Making Flutter cheap means that hobbyists can connect that many more devices — say, all the lights in a room, or temperature and moisture sensors in a greenhouse,” explains Quartz. “No one is quite sure what the Internet of Things will lead to because the enabling technologies, including cheap wireless radios like Flutter, have yet to become widespread.”

Alexander is using a Kickstarter campaign to pay for coding of the software protocols that will run Flutter. The result will allow Flutter to create “mesh networks” that will allow individual Flutter radio to re-transmit data from other Flutter radios nearby. This could potentially create larger, citywide networks that hobbyists and startups can use.

The ultimate goal is to create a system that addresses the foundation of the Internet of Things that is long range, consumes little power, and is fast enough (600kbps or approximately 1/20 the speed of a typical home Wi-Fi network). The lower speed allows data to travel farther, and sensors typically send short strings of data.

A video introduction to Flutter can be found on YouTube.