On Wednesday, Vizio debuted WatchFree to its TV sets with its SmartCast operating system, adding more access to free, ad-supported TV programming. Pluto TV, an ad-supported streaming service, powers the service, which will offer 100 channels including NBC News/MSNBC, Fox Sports, MST3K and The Surf Channel, as well as movie channels. In the near future, “Ramsay’s Kitchen Nightmares” and “Unsolved Mysteries” will appear as pop-up channels. Vizio’s SmartCast operating system was first launched in 2016.

Variety reports that WatchFree is “presented as a dedicated input on Vizio TVs, mimicking the way a cable box would appear on a TV.” Vizio had originally gotten rid of all screen apps in 2016, relying on “Google’s Chromecast technology to control playback from mobile devices.” The company added apps back to the TV screens in 2017. 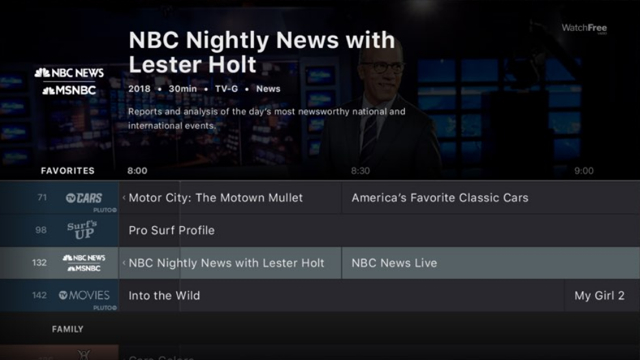 The Verge reports that, “WatchFree will get its own dedicated input, so it’ll have nearly the same prominence as your HDMI inputs and the main SmartCast screen.” It noted that the NBC and Fox channels “aren’t the actual cable networks,” but rather “different versions created for OTT services.” Among other channels available on WatchFree will be Black Cinema, Frontdoor, and Cats 24/7. WatchFree does not permit pausing or rewinding and it is live/linear.

“Vizio is by no means trying to position WatchFree as your new favorite streaming destination,” says The Verge. “More than anything else, it’s sort of a fallback for cord cutters who feel like venturing someplace new for a thing to watch — outside of Netflix, Hulu, Amazon Prime Video, and other apps that can be casted to Vizio’s sets.”