San Francisco-based kids’ entertainment startup ToyTalk, founded by former Pixar execs, just debuted its first product, an eight-episode app that lets children chat with Thomas the Tank Engine and his friends as they go on different adventures. The app is the result of ToyTalk’s new partnership with Mattel, which owns the Thomas the Tank Engine franchise. The interactive app, which takes advantage of kids’ familiarity in speaking with virtual entities, debuts just as Thomas the Tank Engine celebrates its 70th anniversary.

The iOS app allows children to have two-way conversations with Thomas as well as his friends Percy, Emily, James, Gordon, Toby and Sir Topham Hatt as they go on eight journeys through the Island of Sodor. 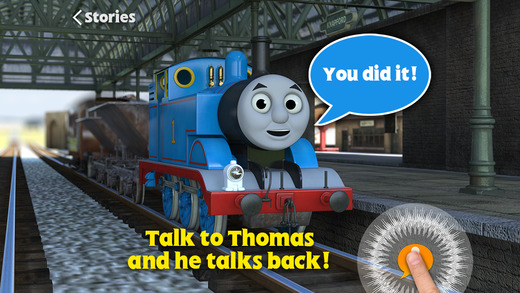 According to TechCrunch, “the first story in the app is free, then each of the five additional episodes are available as in-app purchases of $0.99 apiece or $3.99 for the bundle. There are also two bonus episodes that are unlocked after kids complete the first six, bringing the total to eight.”

The app, which encourages conversations, teaches shapes, plays memory games, solves mysteries and offers other kid-friendly activities, works similarly to ToyTalk’s other apps, including SpeakaZoo, The Winston Show and SpeakaLegend, which offer “clever stories where kids talk to fantastical characters who both initiate conversations and respond to questions.”

ToyTalk’s technology is the brainchild of former Pixar CTO Oren Jacob and Martin Reddy of SRI and Pixar. It involves speech recognition tech combined with natural language processing, and “a little AI.”

The Thomas & Friends Talk To You app, available now on iTunes and later on Android, is COPPA-compliant and kidSAFE-certified. That’s a response to earlier consumer concerns that ToyTalk’s privacy policy, says TechCrunch, “seemed to violate COPPA (the Children’s Online Privacy Protection Act), as it implied that the voice recordings would be filed and used for advertising purposes.” ToyTalk countered that the recordings were strictly for R&D purposes.