Theme parks have a history of adding mobile games and apps such as “Club Penguin Island” and “Disney Magic Kingdom” to allow visitors to continue their experiences outside the park and encourage return visits. Now, augmented reality and virtual reality are opening the door to other game experiences that may make a transition from peoples’ homes into shared immersive environments in the theme park. Currently, VR gaming, with spending set to exceed $7 billion in 2018, is the most popular use case for the new technology.

VentureBeat reports that, “despite its more personal nature, VR is still being integrated into some park rides and attractions, albeit in rudimentary ways,” pointing to SeaWorld’s Kraken roller coaster that offers “VR headsets that sync up to the ride and offer a story with an immersive view of ocean life.” 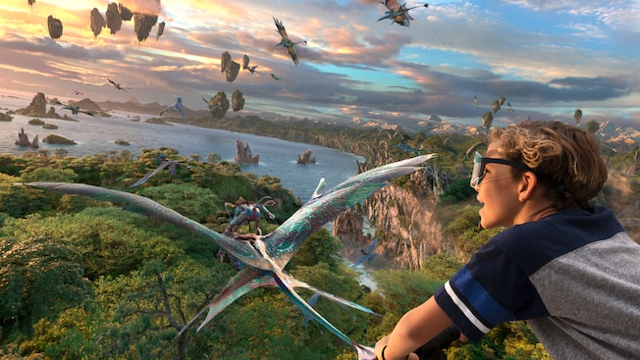 Disney World offers “Avatar: Flight of Passage” (above), a ride with “a conceptually similar experience based on the film.” At Knott’s Berry Farm in southern California, visitors can partake in “competitive VR shooting experiences.” VR is also being used “as a marketing tool for ride previews,” which is “driving more traffic to websites and social channels.”

Park designers are also using VR “for concept and design planning to help visualize the finished product before construction has taken place,” which also helps them “incorporate more feedback from their clients.”

Theme parks are leveraging their “enormous, controlled environments” to create augmented reality experiences; for example, “theme parks embraced Pokémon Go Gyms and PokeStops as a way to entertain customers who are waiting in lines, or just as an added benefit to visitors” and Six Flags developed a Pokémon Go guide for their parks.

VB predicts that, “AR will begin to evolve using current special effect technologies, such as projection mapping and Musion screens, and then layering in personal AR devices into those environments.” Theme park developers, it says, “want to target their guests’ existing emotional attachment to their own personal gaming environment and extend that experience into AR attractions,” but it is difficult to create a “seamless original AR experience.”

For this reason, developers are more focused on “heightened gaming IP-integration,” which provides “large user bases that already understand the universe and how to interact with it.” For example, Super Nintendo World is in development at Universal Orlando; developers are also working towards allowing park visitors to link their gamer-tag to theme park experiences, which could be shaped by their online accomplishments. That would make for a customized experience that could “also drive repeat visitation as more online achievements trigger additional customized responses.”

Technical challenges that need to be resolved include “scaling of AR experiences.” The ability to apply a theme park experience’s “orchestra of sounds, sights, display, lighting, movement, and other special effects” to an AR attraction is “a significant hurdle because of the many touch points involved.”

All this is taking place against a backdrop of skyrocketing numbers of gamers. A 2017 Nielsen report stated that, “64 percent of Americans 13 years or older play games in 2016, up from 58 percent in 2012.”