The Impact of Electronic Devices on Developing Minds

What will the future look like, when the generation of children growing up on portable screens ascends into adulthood? The long-term neurological effects are yet unknown, according to Dr. Gary Small, director of the Longevity Center at UCLA. However, what is known: the brain is highly sensitive to screen-based stimuli and spending too much time on devices and less time with people could hinder communication skills. 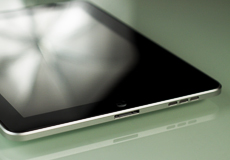 “We really don’t know the full neurological effects of these technologies yet,” said Small. “Children, like adults, vary quite a lot, and some are more sensitive than others to an abundance of screen time.”

“So will a child who plays with crayons at dinner rather than a coloring application on an iPad be a more socialized person?” asks The New York Times.

According to Ozlem Ayduk, associate professor in the Relationships and Social Cognition Lab at the University of California, Berkeley, children will stop engaging with others at the dinner table whether they are preoccupied with crayons or a tablet.

“There are value-based lessons for children to talk to the people during a meal,” said Ayduk. “It’s not so much about the iPad versus nonelectronics.”

But some studies, like the one published last week from the Millennium Cohort Study, found that children watching more than three hours of TV, videos or DVDs a day had more of an increased risk of “conduct problems, emotional symptoms and relationship problems by the time they were 7 than children who did not,” reports NYT.

Interestingly, “the study, of a sample of 11,000 children, found that children who played video games — often age-appropriate games — for the same amount of time did not show any signs of negative behavioral changes by the same age,” the article continues.

Even so, people like Sherry Turkle, professor of science, technology and society at the Massachusetts Institute of Technology, has this to say about whether or not children should be provided with electronic devices: “Learning about solitude and being alone is the bedrock of early development, and you don’t want your kids to miss out on that because you’re pacifying them with a device.”

Turkle suggests that young children need to spend time thinking independently of a device. “They need to be able to explore their imagination. To be able to gather themselves and know who they are. So someday they can form a relationship with another person without a panic of being alone,” she said. “If you don’t teach your children to be alone, they’ll only know how to be lonely.”