Amazon to Unveil the Kindle Fire Today: First Real Competitor to the iPad?

The Rumors are True: First Look at the Amazon Kindle Tablet

Amazon Sales on the Rise, but Expansion is Costly 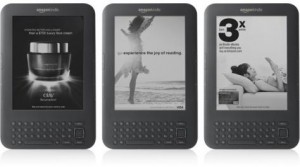 Amazon announced that its new ad-supported Kindle will launch April 27, nearly a week earlier than originally expected. The e-reader — dubbed Kindle with Special Offers — will ship for $114 through Amazon, Target and Best Buy (that’s $25 less than the Wi-Fi only version).

According to Amazon, the cost reduction is a result of the device being subsidized by advertising. Early sponsors include General Motors, Proctor & Gamble and Visa. “Special offers” will be made available directly to the new Kindle related to Amazon.com gift cards, audible books and products from the various Amazon stores.

The latest Kindle is 21 percent smaller and 17 percent lighter than its predecessor, but features the same 6-inch reading area. The company claims the device features the “most advanced E Ink Pearl display technology” and touts 50 percent improved screen contrast with crisper, darker fonts.

It’s worth noting that the ad-supported model is getting more press than the Kindle’s new specs. We’ve seen similar approaches with other devices and services in the past, with mixed results. It will be interesting to see how consumers respond.