Facebook in Pursuit of Interactive Video With Vidspresso Deal

Facebook struck a deal with Utah-based Vidpresso to acquire its technology and absorb its seven-person team, without actually buying the company. Vidpresso’s website says that the new partnership will help put its tools in the hands of creators. Founded in 2012 to “make video more like HTML,” Vidpresso allows publishers to incorporate interactive graphics and superimposed captions to encourage viewers to respond to polls or ask questions. BuzzFeed, Nasdaq, NBC, TED, Turner Sports and Univision are among its customers. END_OF_DOCUMENT_TOKEN_TO_BE_REPLACED

The World Wide Web Consortium (W3C) has formally moved its Encrypted Media Extensions (EME) anti-piracy mechanism to the stage of Proposed Recommendation. The decision of whether or not to adopt the EME standard now depends on a poll of W3C’s members, which have until April 19 to respond. Although the proposed standard has many critics, W3C director/HTML inventor Sir Tim Berners-Lee has personally endorsed it. Engineers from Google, Microsoft and Netflix created EME, which has been under development for some time. END_OF_DOCUMENT_TOKEN_TO_BE_REPLACED

Facebook recently open-sourced its React Native framework to allow developers to build native mobile apps without having to compromise their use of JavaScript. The problem for many app developers has been that in order to build high performing apps, they would often have to go through the trouble of using Apple or Google’s complicated native tools. With React Native, app developers will be to create sophisticated apps while making use of the far less complicated JavaScript software.  END_OF_DOCUMENT_TOKEN_TO_BE_REPLACED

LinkedIn Has 300 Million Registered Users, Mobile Use on Rise

LinkedIn recently announced that it now has more than 300 million registered users, about two-thirds of which are based outside the United States. While the company has not specified how many of the 300 million are active monthly users, it reported 139 million monthly unique visitors and 48 million Slideshare visitors for the fourth quarter of 2013. During that same period, LinkedIn noted that 41 percent of its traffic came from mobile devices, a percentage it expects to continue increasing. END_OF_DOCUMENT_TOKEN_TO_BE_REPLACED

In an effort to join the official conversation on how to come up with a solution for copy protection of videos on the Web, the Motion Picture Association of America has joined the World Wide Web Consortium (W3C), which makes official decisions on Web standards like HTML. A new HTML component allows websites to host video directly on their sites instead of having to use a video tag, which doesn’t enable copy protection. Some, however, don’t care for the new approach. END_OF_DOCUMENT_TOKEN_TO_BE_REPLACED

While many are in favor of DRM being integrated into HTML5, some open Web advocates are concerned that the integration will eventually lead to third parties controlling too much of our online browsing. Tim Berners-Lee suggests that allowing content protection may be needed for standards to combat the rise of proprietary platforms. Meanwhile, mobile operating systems such as Firefox OS will be DRM-free. Also, some TV networks and performers are selling their content without digital restrictions. END_OF_DOCUMENT_TOKEN_TO_BE_REPLACED

Amazon announced that developers now have the option of creating Web apps that will be offered alongside native Android-based programs on its Appstore. The move could encourage developers to distribute HTML5-based apps without converting them to Android versions. It could also potentially lead the charge for change with other stores. Developers currently have to convert their apps to native iOS and Android versions for availability via the Apple App Store and Google Play. END_OF_DOCUMENT_TOKEN_TO_BE_REPLACED

Developers Struggle to Build Ideal Apps for Every Smart TV

Developers face significant challenges in creating apps for smart TVs due to the large number of devices. Most manufacturers have their own platforms, with limited compatibility among them. TV makers are beginning to simplify the programming process by adopting HTML5, while bringing an app to multiple platforms still requires significant resources. Netflix devotes major resources to creating its apps, but few may be able to follow their example. END_OF_DOCUMENT_TOKEN_TO_BE_REPLACED

Mozilla is teaming up with major phone manufacturers as part of a plan to offer sub-$50 smartphones in emerging markets. The company is looking at international regions with growth potential as the global market for smartphones continues to take off. Mozilla is also pushing for more mobile devices to run its Firefox operating system, which it is pitching as an alternative to dominant systems from Google and Apple. END_OF_DOCUMENT_TOKEN_TO_BE_REPLACED

During NewBay Media’s “TV in a Multiplatform World” event last week in New York, industry execs participated in a panel called “Tablet Tune-Ins: Syncing Up with the Second Screen” that was moderated by Jeff Baumgartner, technology editor for Multichannel News. The panel discussed some compelling points regarding today’s second screen experience, the status of user engagement and the emerging role of HTML 5 technology. END_OF_DOCUMENT_TOKEN_TO_BE_REPLACED

Disruption: Will Google Take Over the Desktop with Chrome?

Google Chrome has the potential to follow mobile as a second significant disruption to computing. With Chrome, Google is making a move to dominate computing as an entry to a new app economy. Kevin C. Tofel, writing for GigaOM, suggests that within a year, many of us will be using a Chromebook — but not necessarily “Google-designed hardware; instead it will be on the Mac, Windows or Linux machine you have at that time.” END_OF_DOCUMENT_TOKEN_TO_BE_REPLACED

The World Wide Web Consortium published a working draft last week for Encrypted Media Extensions (EME), which is a proposed framework that enables delivery of DRM-protected media content via browsers without using plugins such as Flash or Silverlight. While the announcement has met with sharp criticism from groups including the Electronic Frontier Foundation and the Free Software Foundation, Ars Technica suggests the framework will help keep the Web relevant. END_OF_DOCUMENT_TOKEN_TO_BE_REPLACED 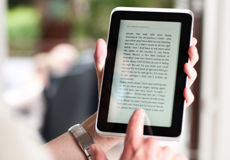 Future of the Internet: Do Web Technologies Need an Owner?

Renewing Developer Relations: Twitter Pulls Itself Up by its Bootstrap