Apple unveiled a new Photos app during its Worldwide Developers Conference earlier this month in San Francisco. Now it seems that the app will serve as a new platform for the upcoming OS X Yosemite. As a result, Apple will no longer develop its Aperture pro photography application, and iPhoto will be replaced by the new Photos app. The transition is designed to provide a more seamless experience, since users will be able to edit and search their Photo Library in the cloud on any Apple devices. END_OF_DOCUMENT_TOKEN_TO_BE_REPLACED

In addition to the new iPads unveiled yesterday, Apple made several announcements regarding its hardware and software products. The new MacBook Pro and MacBook Air laptops will go on sale immediately, while the $2,999 Mac Pro desktop will ship before the end of the year. Apple’s iWork and iLife suites of office and creative software are now free with every hardware purchase. Another surprise is the company’s decision to offer its Mac operating system, OS X Mavericks, as a free download. END_OF_DOCUMENT_TOKEN_TO_BE_REPLACED 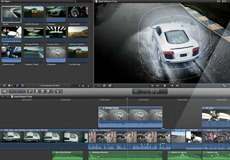 More than a year has passed since Final Cut Pro’s last release, but the word is out that Apple has plans for a Spring announcement. Apple recently invited a small group of professional video editors to the Cupertino campus for a test run.

According to TechCrunch, early reports from those who demonstrated the new version suggest that the changes are “dramatic and ambitious” and may address concerns that Apple has turned its focus regarding video editing from the professional to the consumer space.

The new version of Final Cut Pro is said to be a “major overhaul” reports 9to5Mac, including a new user interface, 64-bit compatibility, and architectural enhancements.

TechCrunch reports Apple has plans to release the new version of FCP in Spring 2011, in a launch possibly coinciding with April’s NAB conference.

Walter Murch Addresses Why 3D Does Not Work

Film editor and sound designer Walter Murch wrote a letter to Roger Ebert in which he discusses the pitfalls of editing and viewing 3D movies.

Ebert notes that Murch is uniquely qualified to comment on 3D, considering he has received Academy Award nominations for films edited on four different systems, including: upright Moviola, KEM flatbed, Avid, and Final Cut Pro. He also edited the 3D “Captain Eo” in the 1980s and wrote “In the Blink of an Eye: A Perspective on Film Editing” in 1995.

In his letter, Murch addresses a number of compelling points such as the inherent darkness of the 3D image, the strobe effect of horizontal movement in 3D, and what he sees as problematic issues involving how our eyes and brain interpret convergence, focus, and immersion. Murch sums up his take on 3D as, “dark, small, stroby, headache inducing, alienating. And expensive. The question is: how long will it take people to realize and get fed up?”