Gamification: Max Wants to be Your Personal Netflix Host

Netflix has launched a new recommendation service called “Max” that chats with users and plays amusing games to help viewers discover new TV shows and movies. The games center on genres and actors to help gauge user preferences. Available only on the PlayStation 3 for now, the Netflix blog reports that Max will be available for other devices in the future, with the iPad version expected next. According to Netflix, Max is “rumored to be the child of Siri and HAL 9000.” END_OF_DOCUMENT_TOKEN_TO_BE_REPLACED

Viacom announced the results of a new study last week that examines the relationship between television and related social media habits. The study surveyed 5,000 viewers, ages 13-49 (in the U.S., U.K. Brazil, Germany and Russia) who weekly use at least two or more social media platforms. “When Networks Network: TV Gets Social” uncovered three key areas that lead viewers to engage in TV-related social media: Functional, Communal and Playful. END_OF_DOCUMENT_TOKEN_TO_BE_REPLACED

Twitter is capitalizing on the growing trend of television viewers using social media while watching TV. Its new product called Twitter Amplify will allow marketers to match TV advertisements with Twitter commentary by viewers who are watching specific programming. Brands can then forward messages to selected Twitter users who have already watched the TV ads. The company offered a presentation on Twitter Amplify in New York yesterday. END_OF_DOCUMENT_TOKEN_TO_BE_REPLACED

Discovery is launching its first online video network today in an attempt to attract largely young, male viewers who are becoming more challenging to reach through traditional TV. Called TestTube, the new online network will initially offer 15 original short-form shows that focus on science and adventure, available for free via YouTube, Xbox and TestTube’s website. The network was developed with online video producer Revision3, which Discovery acquired last year. END_OF_DOCUMENT_TOKEN_TO_BE_REPLACED

Making a Music Video from the International Space Station

Occasionally we like to share information that is not necessarily about breaking news related to new products, services or industry trends — but more about innovation and inspiration. This is one of those stories. Canadian astronaut Chris Hadfield recently made history when he performed a song co-written with Barenaked Ladies frontman Ed Robertson in the first Earth-to-Orbit musical performance. Now he’s released a music video of his version of David Bowie’s “Space Oddity” recorded from the International Space Station. END_OF_DOCUMENT_TOKEN_TO_BE_REPLACED

Nielsen has scheduled a pilot program for its previously announced Digital Program Ratings, intended to measure online TV audiences. Broadcast and cable entities including ABC, AOL, A+E, CBS, Discovery, Fox, NBC and Univision are scheduled to participate in the ratings system testing May through July. The pilot program is the next step toward a broader commercial rollout, anticipated to launch later this year. END_OF_DOCUMENT_TOKEN_TO_BE_REPLACED

Twitter signed deals over the weekend with BBC America and Comedy Central that will bring video clips inside users’ real-time streams (last week we reported that Twitter was in discussions with Viacom, Comcast and NBC). While there have been video content deals before, such as featuring Weather Channel updates in expanded tweets, the new deals could serve as prototypes for future video sharing. Perhaps as a sign of things to come, Twitter also announced a new deal with a major ad-buying firm. END_OF_DOCUMENT_TOKEN_TO_BE_REPLACED

Through an agreement with Comcast, 3net will begin offering its 3D programming to Xfinity TV customers starting on January 28. 3net is a joint venture 3D network from Sony, Discovery and IMAX. “3net also has carriage through DirecTV, Google Fiber and Service Electric as well as Netflix,” notes Carolyn Giardina for The Hollywood Reporter. END_OF_DOCUMENT_TOKEN_TO_BE_REPLACED

Justin Timberlake released his latest song, “Suit & Tie,” on Myspace last week in order to promote both his new album and the revamped version of Myspace (Timberlake is a minority partner in the group that purchased the social network in 2011). The new Myspace, which lets users listen to music for free in order to help promote artists, has drawn early praise for its functionality and sleek design, but it may have hit a bump in the road as a coalition of indie record labels claims the network is using music from member labels without permission. END_OF_DOCUMENT_TOKEN_TO_BE_REPLACED 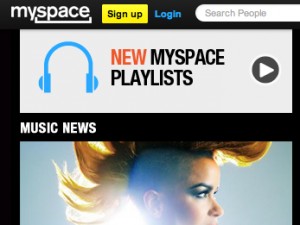 Justin Timberlake Unveils New Myspace: Is it Worth the Time?

Is Skype Co-Founder Gunning for Netflix with Subscription Vdio?