Starbucks is introducing a new app for iPhones that allows customers to order and pay without having to visit the checkout counter. The beta service launched this week in Portland, Oregon. Starbucks plans to follow up by launching “Mobile Order & Pay” city-by-city throughout 2015, and introducing an Android version. The massive reach of a company like Starbucks places it in a position to successfully link mobile devices to in-store retail, an issue Silicon Valley has been trying to address for years. 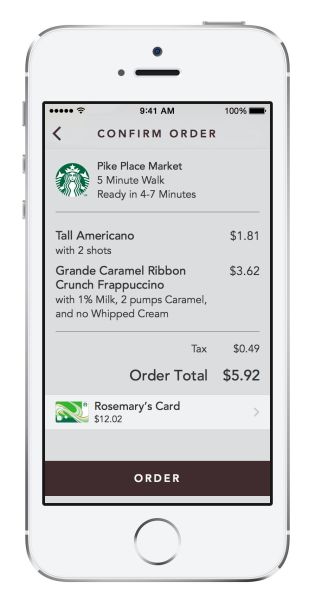 Starbucks currently has about 12,000 locations in the U.S. handling 47 million transactions each week. According to CEO Howard Schultz, 7 million of those weekly transactions involve customers paying via their phones at the checkout counter.

“In other words, a full 15 percent of Starbucks purchases in the U.S. are made with phones, Wired reports. “That’s remarkable at a time when paying by phone is still the rare exception, Apple Pay or no. This also means, like Apple and iTunes, Starbucks has a coveted trove of linked credit cards, which it can turn from pay-in-store to pay-in-app.”

Starbucks Chief Digital Officer Adam Brotman suggests that ordering ahead will improve the Starbucks experience by eliminating the “pinch point” of the line. The company also recently announced that it will start a delivery service during the second half of 2015.

“In Silicon Valley, the typical recipe for success involves building a platform that other businesses use,” notes Wired. “Starbucks, by contrast, has succeeded by controlling both the coffee and the tech, the store and the app. It’s not clear yet whether Starbucks’ success offers an alternative model for other retailers, or if it’s an outlier because it sells a product that upon which customers develop a genuine physical dependence.”