SparkFun does business by its own rules. The electronics supplier designs dozens of new products a year and never patents any of them. And while most of what the company actually sells is sourced from other suppliers, “where the company has made its name is in a stable of its own custom parts and kits, the designs for which it gives away for free,” explains Wired. 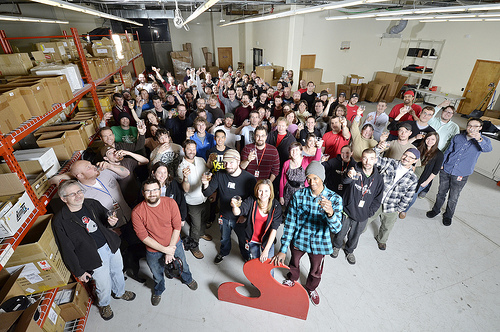 “Every time I hear that a class of 8th graders are learning how to blink LEDs I realize that we’re making a difference,” says CEO Nathan Seidle, who started the company when he was a junior in college, studying engineering. “I also get the uneasy feeling that I could easily be replaced by a 15-year-old in a few years’ time.”

“In an era of bloody patent warfare and venture capitalists obsessed with the secret sauce, this approach — common among maker suppliers — is striking. You can’t help but wonder if Seidle could worry less about those fifteen year olds, if he’d stop giving them all his secrets,” writes Wired.

But that’s not true, according to Lara Boudreaux, SparkFun’s marketing department project manager: “We find that people will copy your design no matter what you do. You might as well just play the game and go ahead and innovate. It’s fun, it keeps us on our toes.”

Boulder, Colorado-based SparkFun, which just celebrated its 10th anniversary, has a very loyal community of fans and customers that keep coming back for more. It’s what keeps the company going. That, and its team of experts who invent at breakneck speeds.

“We introduce around 15 new products every week,” says Boudreaux. And with the same speed they’re invented, many don’t make the cut. “We retire at a slightly slower rate, I’d say two to three products we design die every month, on average,” she notes.

Seidle knows his open source approach is unorthodox: “Maybe you think I’m naive. Maybe you think an open source company can’t be scaled above 150 people. That’s fine, I’m sure patents will work for you. But for myself, my 135 co-workers, 75 million dollars of sales, 600,000 customers and our 431 unpatented products wish you good luck.”