Sony introduced its FDR-AX1 Handycam last September, which the company billed as “the world’s first consumer 4K camcorder.” However, its price tag, form factor and extensive features seemed more professional than consumer. At CES, Sony unveiled the more compact and affordable FDR-AX100, which at $1,999 should appeal to 4K early adopters. The Ax100, expected to hit shelves in March, features a 1-inch 14.2-megapixel Exmor R CMOS sensor, larger than those typically found in camcorders.

“The camcorder won’t capture cinema-quality 4K, but Sony says the quality is designed for 4K TVs,” reports Digital Trends, noting that the AX100 feels more like a consumer camcorder. “Sony says the AX100 is 74 percent smaller and 66 percent lighter than the AX1.” 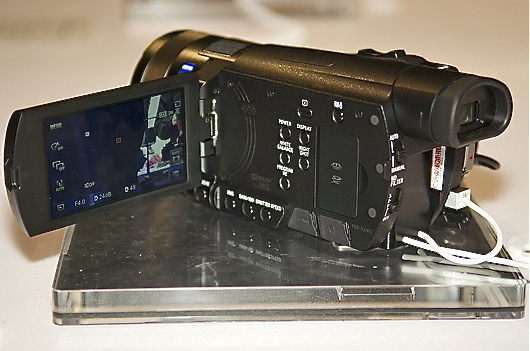 Sony’s Bionz image processor allows the AX100 to smoothly capture and play back 24p and 30p video content. According to Sony, the new processing tech “achieves an even better balance of exceptional detail and advanced noise control, while its ability to record at 120p enables slow-motion playback at one-fifth the speed in a 24p environment in post-processing. Together with the camcorder’s advanced Cinematone Gamma/Color function, a sumptuously warm, rich look to footage can be achieved.”

“Since this is a consumer-oriented product, there’s Wi-Fi built in,” notes DT. “With the PlayMemories Mobile app for iOS and Android, you can use your smartphone to control the camcorder remotely. Users of NFC-enabled Android devices to easily pair it with the camcorder. Wi-Fi can also be used to stream content from the camcorder to a networked TV.

The Sony Blog has a 5-minute video on the AX100 from the CES show floor.