Soderbergh Distinguishes Between Cinema and Movies

Last week, filmmaker Steven Soderbergh dissected the business of making movies when he spoke on the current state of cinema at the San Francisco International Film Festival. Soderbergh, who has achieved success in both the Hollywood system and the independent arena, spoke at length about the challenges faced by today’s artists to get their movies screened in theaters. Based on unprecedented demand, Soderbergh gave The San Francisco Film Society permission to post his keynote video and transcript in its entirety.

You can access the presentation on the SF Film Society Blog. The following are several highlights:

“Sometimes, when you get a really good artist and a compelling story, you can almost achieve that thing that’s impossible which is entering the consciousness of another human being — literally seeing the world the way they see it. Then, if you have a really good piece of art and a really good artist, you are altered in some way, and so the experience is transformative and in the minute that you’re experiencing that piece of art, you’re not alone. You’re connected to the arts. So I feel like that can’t be too bad.” 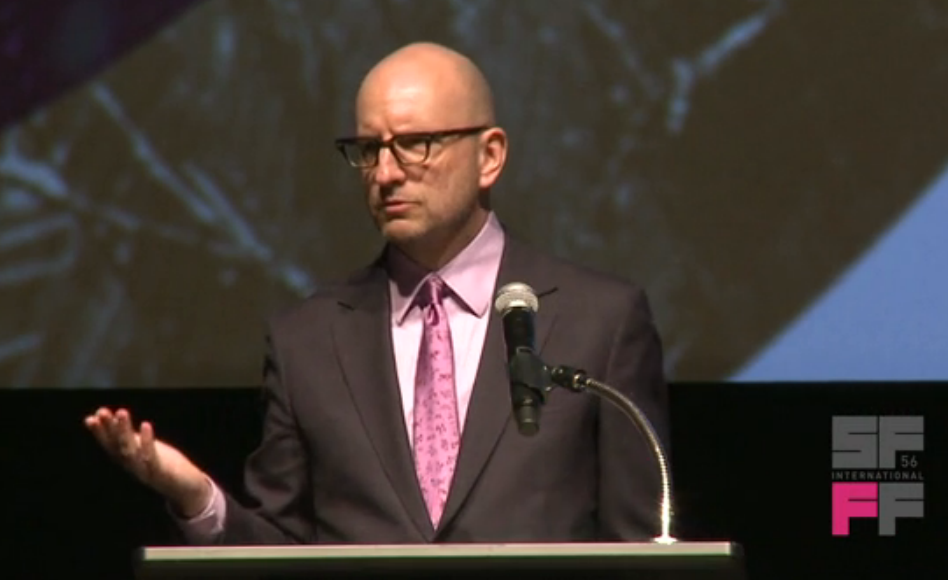 “…is there a difference between cinema and movies? Yeah… The simplest way that I can describe it is that a movie is something you see, and cinema is something that’s made. It has nothing to do with the captured medium, it doesn’t have anything to do with the where the screen is, if it’s in your bedroom, your iPad — it doesn’t even really have to be a movie: it could be a commercial, it could be something on YouTube. Cinema is a specificity of vision, it’s an approach in which everything matters. It’s the polar opposite of generic or arbitrary and the result is as unique as a signature or a fingerprint. It isn’t made by a committee, and it isn’t made by a company, and it isn’t made by the audience. It means that if this filmmaker didn’t do it, it either wouldn’t exist at all, or it wouldn’t exist in anything like this form.”

“But, as long as you have filmmakers out there who have that specific point of view, then cinema is never going to disappear completely. Because it’s not about money, it’s about good ideas followed up by a well-developed aesthetic. I love all this new technology, it’s great. It’s smaller, lighter, faster, you can make a really good-looking movie for not a lot of money, and when people start to get weepy about celluloid, I think of this quote by Orson Welles when someone was talking to him about new technology, which he tended to embrace, and he said: ‘I don’t want to wait on the tool, I want the tool to wait for me,’ which I thought was a good way to put it. But the problem is that cinema as I define it, and as something that inspired me, is under assault by the studios and, from what I can tell, with the full support of the audience. The reasons for this, in my opinion, are more economic than philosophical, but when you add an ample amount of fear and a lack of vision, and a lack of leadership, you’ve got a trajectory that I think is pretty difficult to reverse.”

“Well, how does a studio decide what movies get made? One thing they take into consideration is the foreign market, obviously. It’s become very big. So that means, you know, things that travel best are going to be action-adventure, science fiction, fantasy, spectacle, some animation thrown in there. Obviously the bigger the budget, the more people this thing is going to have to appeal to — the more homogenized it’s got to be, the more simplified it’s got to be. So things like cultural specificity and narrative complexity, and, God forbid, ambiguity [laughter], those become real obstacles to the success of the film here and abroad.”

“So, whenever I despair I think, OK, somebody out there somewhere, while we sit here, somebody out there somewhere is making something cool, that we’re going to love, and that keeps me going. The other thing I tell young filmmakers: when you get going and you try to get money, when you go into one of those rooms to try and convince somebody to make it, I don’t care who you’re pitching, I don’t care what you’re pitching — it can be about genocide, it can be about child killers, it can be about the worst criminal injustice that you can imagine — but as you’re sort of in the process of telling this story, stop yourself in the middle of a sentence and act like you’re having an epiphany, and say: ‘You know what, at the end of this day, this is a movie about hope.'” [laughter]