Social VR Platforms Proliferate in the Next Digital Land Grab

The typical VR experience is solitary, but an increasing number of companies are exploring the possibility of virtual realty in the context of a social platform. That trend was made clear by Microsoft’s acquisition of AltspaceVR. High Fidelity is an environment that lets users create their own avatars and social worlds, with a marketplace where they can buy avatars and other 3D elements. And vTime, a stationary platform, lets four people at a time engage in fully rendered environments.

The Next Web adds that vTime (pictured below) also offers “the vCast feature which allows you to host and record your own chat show in VR.” VRChat, with $1.5 million in venture funding, lets the users “interact and explore virtual worlds” with “full body and lip sync and eye tracking, as well as a SDK that allows you to create your own worlds and avatars.” 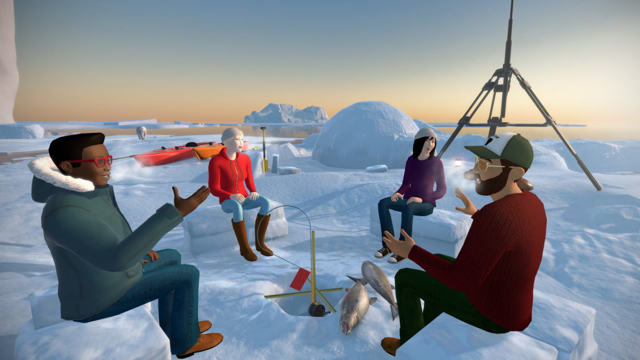 Rec Room from Against Gravity, with $5 million in funding, “has also become a popular platform for social VR recreation featuring a games room where people can join and play games against each other in VR from all around the world.” Momentum around social VR is growing, even as “it’s unlikely that such platforms will replace social media in terms of popularity overnight.”

Another possibility is that decentralized ownership will be the future of social VR. Blockchain-based virtual platform Decentraland founder Ariel Meilich believes that, “virtual reality will flourish once users have a more prominent role in controlling their creations.”

“Currently, the companies that create the virtual worlds own all of the content built by the users,” he said. “They are the ones who profit, reap the benefits from the network effects, and have the power to undo, change or censor what happens within the world itself. The true potential of VR might be realized, and certainly surpass what already exists, if this power were put into the hands of the users instead.”

Centraland began in 2015 “as an open source initiative to build a virtual world, before pivoting into a blockchain tokenization model.” It differs from other social VR platforms in that the users don’t just own the content but the platform itself, and have “collective responsibility for regulating it.” The creators say that the blockchain structure, based on Ethereum, “creates a mechanism for consensus among strangers that allows this to work at scale.”

It’s not the first company to monetize virtual real estate and assets — that honor goes to Linden Lab’s Second Life, “the longest enduring commercial virtual world launched back in 2003.” That company has now created Sansar, “laying its own stake to that next-generation of virtual worlds by offering similar functions to High Fidelity” but also allowing individual users to earn Sansar Dollars that can “be cashed into various currencies via PayPal and traded on a dedicated online exchange called the Sandex.”