Sean Parker’s Airtime Returns as an App for Virtual Viewing

Napster co-founder Sean Parker has relaunched a product that first debuted in 2012 and was almost an immediate flop. Airtime is now an app, for Android and iOS, that lets users gather in a “room” to chat, text and watch YouTube and Vimeo videos together or listen to songs and podcasts from Spotify and SoundCloud. Parker, also an early investor in Facebook, says he created — and now recreated — Airtime to offer an alternative to the “certain loneliness” of the “fast superficial interactions” that form the basis of Facebook.

The Wall Street Journal quotes Parker, Airtime Media’s co-founder and executive chairman, as saying that it has “continued to frustrate me that we don’t have small curated groups of people where my interactions with them can be live and synchronous rather than asynchronous and time delayed.” 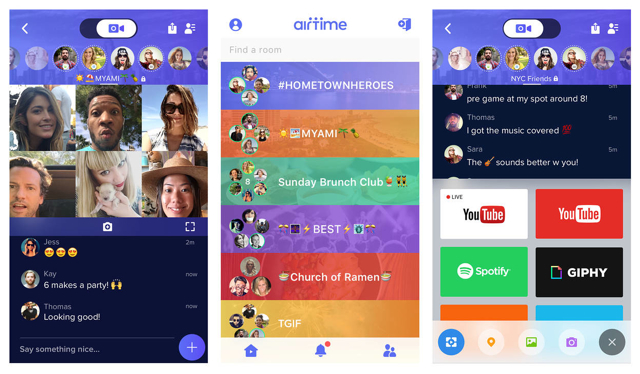 Rooms, which can be private or public, can gather as few as two people or as many as 250, who can chat about sports leagues and teams, watch YouTube-streamed presidential debates or listen to the same music, with the option of sharing up to 15 seconds on Instagram of “whatever video you broadcast to a room.”

The key word for Parker and his Airtime cohorts is “intimate,” which president Daniel Klaus says can happen even in a room of 250 people, because they are communicating in real time. “The goal of the first Airtime was eliminating loneliness, how to allow people to consume content together,” said Parker. “But we had to go back to the drawing board.”

Airtime will eventually add a computer Web browser version and release another version for services such as Apple TV that will let groups watch TV shows and sports together. “This is where video’s going,” said Klaus, who expects others to compete in the space. “Whether we’re going to crack the code on this or somebody else is going to crack the code on this, there’s a Facebook-sized opportunity in this.”

Parker believes that this version of Airtime will finally be a success, and reveals his motivation for giving it another try. “I’m motivated by filling in gaps in the universe, where there’s some sort of thing that is so obvious and should exist but doesn’t,” he said. “Why can’t I watch a video of my daughter with the rest of my family live, even if we’re hundreds of miles apart?”