At the Samsung Developer Conference in San Francisco this week, the company showcased its 360 Round video camera, which captures 360-degree 4K video that can be live-streamed or recorded. The camera, with 17 lenses, is slated for release in Q4. Samsung Electronics vice president Taeyoung Kim says the company is also developing a new version of mobile VR technology with a controller that offers six degrees of freedom (6DOF) and inside-out tracking. Samsung released its Gear VR headset in 2014, which offers three degrees of freedom.

VentureBeat reports that the Gear’s 3DOF “limits the input system for the device,” and that, with the upcoming 6DOF, “Samsung will be able to add full 3D sensing of where your hands or possibly even fingers are in VR, just like with the more expensive, PC-based Oculus Rift.” 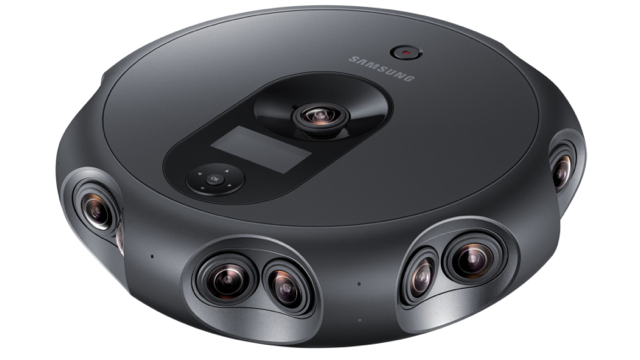 Popular for its low price and wireless operation, Gear VR headsets are in the hands of millions of users, but Samsung’s Kim says, “the new mobile VR technology will feature better immersion, and Samsung is working on global partnerships for mobile VR.”

The Samsung 360 Round (above), which weighs 4.25 pounds, doesn’t yet have a price, but it will cost more than the $125 consumer-facing Gear 360 VR camera. It will, however, capture full 3D audio and offer “low-latency for live-streaming, one-step stitching, and simple editing functions.” Each of the 17 cameras will have “a 1/2.8-inch, 2 megapixel image sensor and f/1.8 lens,” and the new camera also offers “six audio microphones, LAN or USB-C connectivity, 10GB RAM and 40GB of internal storage, with expansion slots for more.”

Kim also said that, “Samsung VR Cloud Tools for creators will provide analytics for consumers, telling people through heat maps where someone is looking while watching 360 video.”

As an example of what the new camera can do, Samsung “posted a 360-degree video of the Coldplay concert in August,” which prompted a “big bump” in viewership.