Redbox, known for its red kiosks where users can rent DVDs and Blu-ray Discs, has unveiled a new on-demand streaming service for movies and TV shows. The new service is not subscription-based but, similar to iTunes or Google Play, allows the user to pay for each movie or show that they rent or buy; the on-demand service, currently in public beta, will offer the same kind of new release movies and shows available in the kiosks. The privately held company offers content from every studio except Disney.

The Verge reports that Redbox, which says it averages 1 million disc rentals each day, started testing the service, for the second time, in July 2016, and “also began offering digital purchases from its kiosks recently.” 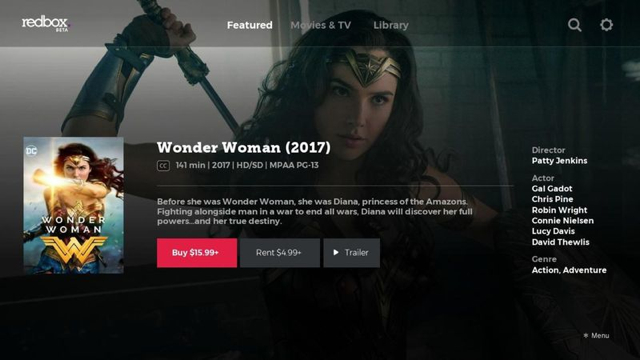 “We know consumers have a lot of choices when it comes to subscription streaming services, but no other brand is as closely associated with new-release movies as Redbox,” said chief executive Galen Smith.

The Wall Street Journal reports that Disney brought a lawsuit against Redbox for “selling digital download codes to the studio’s films.” The on-demand service is “available through the Redbox website, or the Redbox app both on iOS and Android, as well as Apple TV, Chromecast, LG and Samsung smart TVs, and Roku.”

WSJ reports that, “the prices and offerings, starting at about $3.99 for rentals and $9.99 for purchases, are similar to other stores like Apple’s iTunes.” Redbox’s success is driven by its low price of $1.50 a night to rent a DVD; the company will find competing in the digital space to be more challenging because “studios have greater control over the digital rights to their movies” and Redbox won’t be able to “undercut its online competitors.”

Smith says the company’s data on individuals’ rental history can help it suggest films they might like and that the digital offering complements DVDs, “since many movies are available for download before they are on DVD.” Each kiosk can also “only stock between 150 and 200 titles” meaning it cannot “offer many older films that can be streamed.”

“This is an opportunity to keep people in our ecosystem,” he said.

Redbox has “45 million email subscribers, 27 million members of its loyalty program, and its apps have been downloaded 35 million times.” Disney sued Redbox when, in October, it debuted a “different, unsanctioned program” that offered download codes from retail DVD copies. Smith confirmed that the company is still selling such digital download codes and “feels confident in our pro-consumer position.”

Redbox, which was taken private by Apollo Global Management last year, “in a deal that valued it and smaller sibling companies at $1.6 billion,” is “installing between 1,700 and 1,800 new kiosks this year, bringing its total to about 42,000 in the U.S.” Redbox’s press release on its new on-demand service can be read here.