According to the latest rankings from Product Hunt, an app that tracks what digital products are trending, teenagers are migrating from traditional social media outlets and spending more time with apps that help with productivity. Rather than spending most of their time on Twitter and Facebook (and its recently acquired WhatsApp messaging app), teens are turning to apps that involve photo sharing, streaming music, and productivity services related to areas such as to-do lists, online classes and résumé tutorials.

“According to the founder, Ryan Hoover, the [Product Hunt] site drives 2 million monthly users to the apps it shows, and 75,000 people receive its daily newsletter,” Quartz explains. “The site’s primary function is to share and up-vote new apps (typically 30 to 50 daily), but occasionally users can vote on a themed selection of apps.”

The top entries from a recent listing of “Products Teens Love” may be surprising to some (see screen grab below). While Spotify, Songza and Instagram may be expected, it is interesting to see products on the list that involve Q&A (Quora), online learning (Khan Academy), résumé building (Represent), shareable flashcards (Quizlet) and smart to-do lists (Clear). 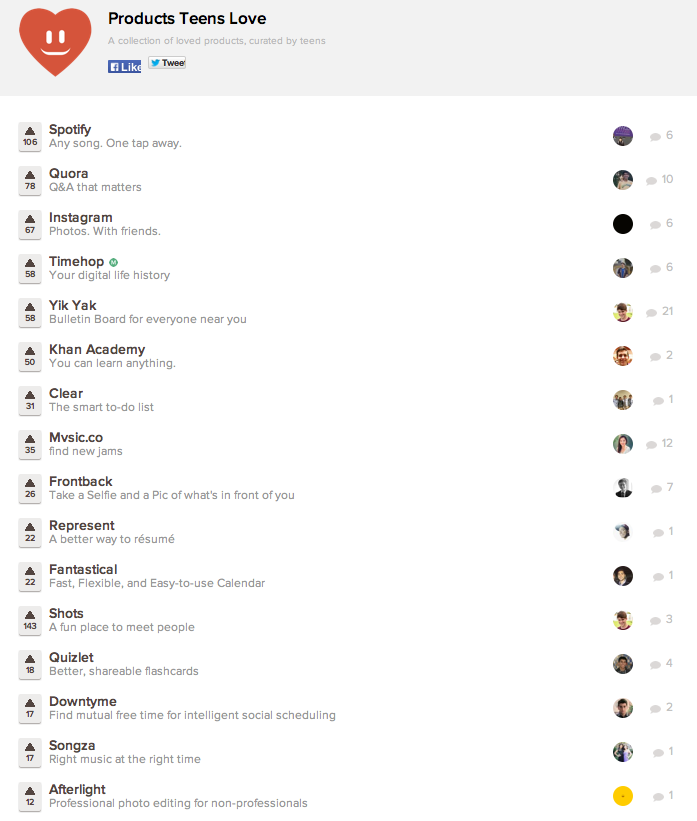 “It looks like the new generation of users find the services that Facebook and Twitter provide less relevant, and will look instead for useful, performance-enhancing products,” suggests Quartz.