Earlier this week we reported that Apple would acquire recommendation startup BookLamp, often referred to as “the Pandora for books.” In related news, Apple has purchased podcasting app Swell, described as “the Pandora of talk radio.” Following the acquisition, Swell announced that its service is no longer available. Disappointed users may be hoping that Apple will somehow integrate Swell into its offerings. Meanwhile, NPR just launched its NPR One app, which offers similar functionality.

Re/code first broke the news that Apple would purchase Swell’s parent company Concept.io in a deal worth a reported $30 million. 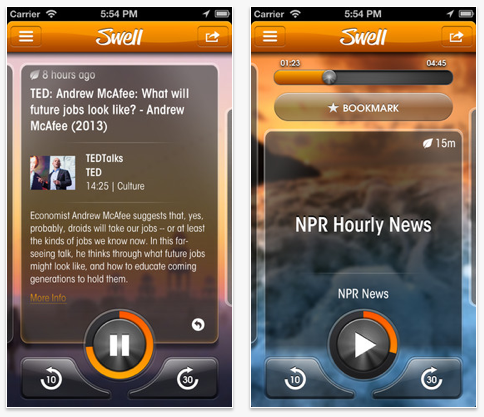 “The Swell acquisition comes as part of a string of content apps that Apple has picked up over the last couple of months, including Beats, which had a significant $3 billion price tag; and book recommendation service BookLamp, which was another small-ish buy,” notes the article.

Swell’s podcast discovery feature was popular with its users. In addition to manually selecting from pre-defined categories, users would have podcasts selected via the app’s algorithm that learned from actions such as likes, shares, skips and listen times. Also, podcasts were conveniently streamed rather than downloaded.

“Swell also featured a drop-dead simple, card-based user interface that was gorgeous,” ZDNet comments. “It literally required zero thought and let the content take center stage. When a podcast was playing Swell gave users the opportunity to swipe left to skip to the next podcast, in addition to the usual play, pause, scrub and share controls.”

“So what’s next?” asks Fast Company. “For one, Swell could be used to help improve Apple’s lackluster Podcasts app, especially as it looks to integrate iOS into dashboards with CarPlay.”