Santa Clara-based startup SoundHound has developed a voice-powered digital assistant that could take on early players in the field, including Siri, Google Now and Cortana. Like the others, the Hound app (for iOS and Android) allows users to interact via voice so that it can perform requested tasks. However, Hound claims to be faster and smarter than its competitors. The app has been in beta with 150,000 testers since last summer, and is now publicly available along with new Yelp and Uber partnerships for restaurant info and ride hailing from within the app.

SoundHound hopes the free app will compete with offerings from Apple and Google to become “the go-to voice interface for smartphones,” reports The Verge. 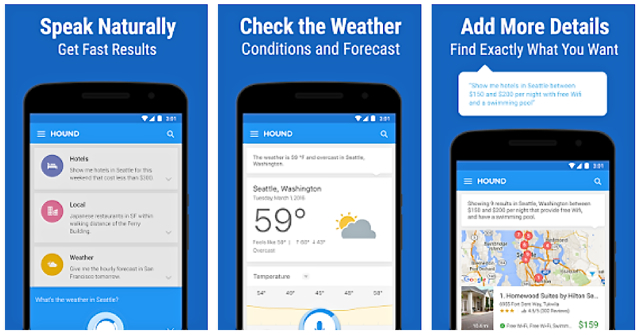 However, looking to become the leader in how we interact with our devices is an enormous ambition. While top companies are actively pursuing the effort, the tech is still in its early stages.

“Apple’s Siri often stumbles on simple requests, while Google Now is a personality-devoid arm of the company’s search engine,” suggests The Verge. “Microsoft’s Cortana is trying to be both clever and useful, but it’s virtually nonexistent on mobile phones where we need it most. Amazon’s Alexa is gaining steam in the smart home, but you can’t ask it anything complex.”

The review describes Hound as “the smartest and fastest voice-based assistant” currently available, “so fast that it can produce near real-time translations of whole sentences in other languages.”

The “Ok Hound” voice command enables hands-free requests and the app is reportedly capable of identifying human context, so that responding to questions and requests becomes an easier process. The iOS version includes 3D Touch support.

According to SoundHound CEO Keyvan Mohajer, Hound has a leg up on other offerings due to its unique natural language processing. The Verge notes that when Hound’s processing is “combined with advances in machine learning and other artificial technology techniques, Hound is able to do what Mohajer calls ‘speech-to-meaning,’” that results in a faster process than those offered by competitors.