Google’s Gmail team launched a new app called Inbox to help users manage their email. Inbox sorts your mail as an assistant might by categorizing incoming messages into Bundles. While this may not be a new concept, the Highlights feature is compelling. Highlights will pull the important information from a message and push it to the top (for example, flight times in a confirmation email from an airline). It even has the ability to update that information (think gate changes or delays).

“It does the same kind of thing with purchases, showing shipping information,” reports Wired. “If you’ve used Google Now, it’s similar to that. It also pulls things like documents, pictures, and other sorts of vital information from the middle of emails, up to the top of the app.” 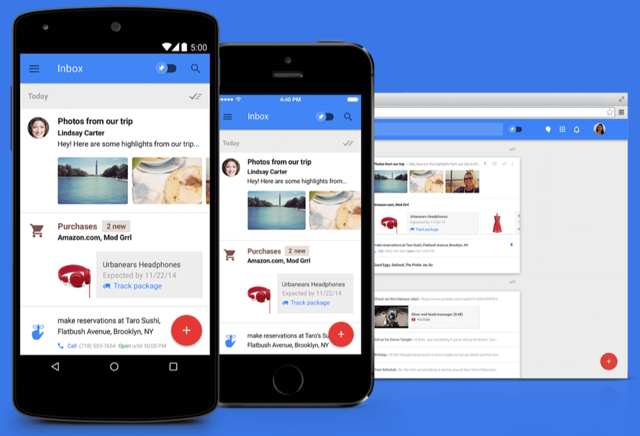 Inbox also includes the ability to Snooze actions and emails until a later date or time — and offers Reminders, which can move a phone number or website address to the front of a message if so desired.

“The new interface definitely takes some getting used to, but it’s clean and modern. I like the little icons that distinguish promotions, bank statements and purchases,” writes Bonnie Cha for Re/code. “I also like that you get a preview of photo attachments and Word files, and other pertinent info like maps and Web articles. But still getting used to how everything is organized.”

“Some of these features aren’t completely novel,” notes Farhad Manjoo in The New York Times. “Inbox requires a series of gestures to navigate and sort your messages, a system that feels similar to that of Mailbox, an email startup that was bought by Dropbox. It also automatically categorizes some of your email in a way that Gmail and Outlook already do. Overall, though, there’s enough that’s new in Inbox that I’m eager to give it a long-term whirl.”

Inbox by Gmail is currently available by invitation for Android, iOS and Chrome users.